In this Real Estate News Brief for the week ending March 28th, 2020… ugly numbers for job losses and economic growth, a possible “snapback recovery”, and encouraging news about medical supplies.

We begin with economic news from the past week and a $2.2 trillion dollar COVID-19 rescue package that helps individuals and companies. The short list of money hand-outs includes $100 billion for hospitals and virus-related healthcare, $290 billion for an infusion of cash into consumer pockets, $350 billion for small-business loans, and $500 billion for hard-hit industries, like the airlines.

This is the third piece of rescue legislation passed by Congress, and there could be more as the U.S. and other countries track the impact of the virus. The Federal Reserve also announced an unlimited bond-buying program to support both small and large companies, and help stabilize the market. The U.S. has counted 140,000 cases so far with more than 2,400 deaths, at the time this podcast was put together. There is some positive news from the medical front however including FDA approval for a 45-minute COVID-19 test, and the development of finger-prick tests that can determine immunity.

The Labor Department reported on Thursday, March 26th, that unemployment applications spiked to 3.8 million last week, as companies shut down and laid off workers to stop the spread of the virus. Economists expect to see those numbers rise as the infection rate peaks across the nation. MarketWatch says that some analysts are predicting an unemployment rate as high as 20%, if the economy is shut down for months.

But the news on the job front isn’t all bad. Many companies are hiring to keep up with changes in the consumer market. Walmart announced 150,000 job openings, Amazon is filling 100,000 positions. Domino’s Pizza is hiring 10,000 people. Stores everywhere are offering delivery services and hiring people to do that. We’re very far from normal right now, but it’s encouraging to see the creation of jobs that will help people pay their bills, and their rent.

Economists say we’re going to see some bad GDP numbers, but remember, this is for the second quarter — not for the whole year. (1) Morgan Stanley predicts the GDP will drop more than 30%. JPMorgan Chase and TD Securities say 25%. Goldman Sachs is forecasting a 24% drop. Bank of America, CitiGroup, Deutsche Bank, and Oxford Economics are estimating a slide of about 12%, while UBS and Bloomberg Economics are about the same at 9%. Bloomberg commented, “The Covid-19 lockdown means a hard stop for the U.S. economy.”

In this case, what goes down, could come roaring back to life in the third quarter. And that’s what many of these same economists believe. Chief economist of Meyer Research, Ali Wolf is one of them. She’s predicting 0.5% growth in the first quarter because of the pandemic with a -10% in the second quarter and a quick snapback after that. She sees the recession and recovery as a “V” which represents a rapid fall and a quick bounce back. She does say a “U” shaped recession is possible, but she says her research supports more of a “V” shape.

New home sales dipped 4.4% in February but they are down from a 13-year high in January, and remain at the second-highest level in 12 years. The coronavirus is making it tough to predict what will happen to the economy and home sales, but Lennar says people are still buying homes. Lennar’s executive chairman, Stuart Miller, told The Real Deal, “Even in the current environment… people are attracted to the safety and security of our homes.” He says, “Since the end of the first quarter, new orders continue to be strong.” (2) Miller says low interest rates help. Lennar is also working on new ways for people to buy homes including digital transactions and curbside closings.

Consumer spending rose 0.2% in February. That could weaken in the coming months, but the relief bill could help offset the loss of income from layoffs. Consumer sentiment was down for March. The University of Michigan says it fell to 89.1. That’s still far from a low point of 55.3 in 2008.

Mortgage rates dropped last week, after a three-week rise. Freddie Mac says the thirty-year fixed-rate mortgage was down 15 basis points to 3.5%. Many lenders are expecting rates to go lower.

The IRS released new details about the delay in filing our taxes because of the pandemic. (3) The Internal Revenue Service moved the deadline from April 15th to July 15th. There’s no need to file any paperwork, July 15th is simply the “new” deadline for filing returns, making payments, and contributing to your retirement accounts. Taxpayers expecting a refund can file now if they want to and get their money right away.

Taxpayers can ask for an automatic extension from the July 15th date but the final date to file is still October15th.

The IRS is also letting people know that there are ways to delay automatic tax payments. If you borrowed money from your retirement account last year and you owe a 10% penalty, you now have until July 15th to pay that amount. The agency is also suspending most audits until July 15th.

The things that don’t qualify for the delay include estate and gift taxes, excise taxes, and payroll taxes, although Congress may also defer that. The deadline to send 1099’s and K-1’s is also April 15th.

There’s encouraging news about how the U.S. is going to get all the medical supplies it needs to treat sick patients. We’re hearing from one company after the next about the production of ventilators, sanitizers, masks, and gowns. Business Insider collected a long list of big companies doing this. Car makers Tesla, Ford, and General Motors are all promising to make ventilators. Partners in that effort include GE, 3M, and Ventec Life Systems. GM also plans to produce 50,000 face masks. Apple managed to get 10 million masks from its supply chain for use in the U.S. and Europe. There are several other big companies on that list including vacuum manufacturer, Dyson, which promised to build 10,000 ventilators for the UK.

Airbnb is contributing as well. (4) It’s working on ways to get free or subsidized housing for front line health care workers. It announced a program to help house 100,000 of these medical soldiers in Airbnb rentals.

Hosts can opt in by offering space for free. They can also charge, but either way, Airbnb won’t be charging a fee so rates will be free or discounted.

The National Association of Realtors has launched a COVID-19 hotline for members. (5) Members can get information on the Association’s response to the pandemic along with information about programs and services that can help them. 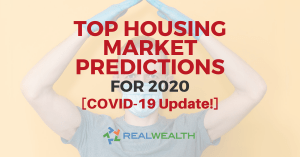 Kathy Fettke is the Co-Founder and Co-CEO of RealWealth. She is passionate about researching and then sharing the most important information about real estate, market cycles and the economy. Author of the #1 best-seller, Retire Rich with Rentals, Kathy is a frequent guest expert on such media as CNN, CNBC, Fox News, NPR and CBS MarketWatch.
PrevPrevious[RWS #758] COVID-19: Being an Early Adopter is Vital in Today’s Changing Economy
Next8 Tips for Collecting Rent During the Coronavirus (COVID-19) PandemicNext
Share on facebook
Share on twitter
Share on pinterest
Share on linkedin
Share on email
Share on print