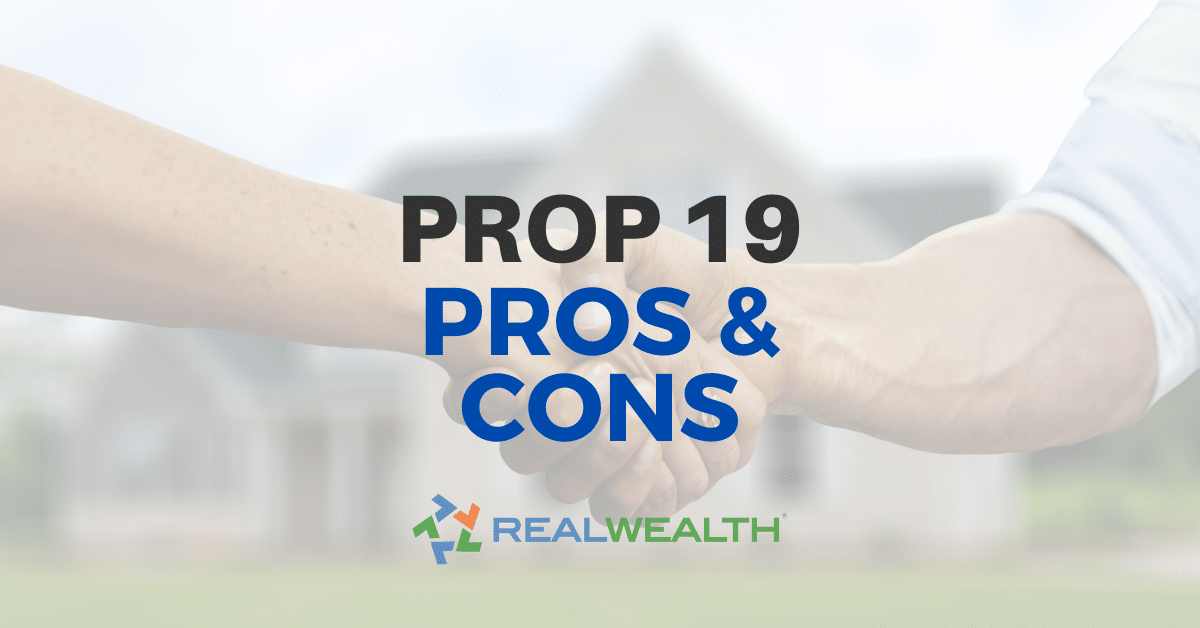 Summary: California voters approved a real estate measure that will help older homeowners, but it could have a big downside for their children. Proposition 19 allows seniors, the disabled, and disaster victims to take their low property tax base with them to a new home. But it also reduces that protection for their heirs. Continue reading to learn more about proposition 19 pros and cons.

Prop 19 won by a slim majority in the last election, but it will provide a significant change to property tax rules implemented by Prop 13. (1) Prop 13 is the 1978 tax measure that set property tax rates to 1% across the state with a maximum 2% increase per year after that. When the home is sold, it’s taxed at market rates so homeowners that haven’t sold their homes have maintained a very low tax rate over time.

Under the new rules, qualified homeowners who are afraid to lose that tax benefit will be able to keep their low property tax base in a new home.

Some of the major pros of prop 19 are that:

Major real estate groups supported the measure. That includes the National Association of Realtors, and the California Association of Realtors which spent $35 million in support of the proposition. One reason for their support is the idea that by inspiring older homeowners to move, the real estate market will benefit. As reported by the San Jose Mercury News, 6 in 10 Santa Clara County homes have not changed hands for more than a decade. Prop 19 might tip the scale in the other direction. (2)

Another Prop 19 benefit is the ability to “trade up” without losing a previous tax base, although the tax bill would be higher.

Proposition 19 Cons: Who Loses with Prop 19?

What Prop 19 gives to some homeowners, it takes away from others. California homeowners have been able to pass along their homes to their children without triggering higher property tax bills as long as the property is used as a primary home by the children. That applies to grandchildren also, with additional rules. It also applies to property used for farming. Under Prop 19, property taxes will go up for the heirs if the market value of the home or farm exceeds the property tax value by more than $1 million. This is a major con of prop 19 for the heirs of homeowners.

That may sound like a big jump in value, but it’s not for California’s big cities and suburbs. And the heirs would still get a tax break compared to anyone else who purchased the home.

But the higher tax base could create a problem for low income families who purchased their homes a long time ago, and would like to give those homes to their children. Those families have been able to live in more expensive areas because they bought their homes at a much lower price, and have avoided high property taxes over the years because of Prop 13.

So what happens when they want to pass those homes to their children? The Merc says that state and local officials haven’t worked out all the details yet on property taxes for inherited homes, but it’s pretty clear that those property taxes will increase.

The president of One80 Realty, Nick Solis told HousingWire: “Not all who receive inherited homes come from money. Many blue collar workers and families bought in previous decades when homes were affordable, and are passing them down to their kids.” He says we’re already seeing many blue collar workers move away from expensive markets like the Bay Area to towns in the Central Valley. Higher taxes on inherited homes will force more to move. (3)

Solis says that Millennials and other younger generations will also be affected. He says they may decide to move to another state and not come back. A few decades ago, California had a much younger population of college grads who built a life here. Solis believes that Prop 19 will make it much harder for young adults to remain in California, and that many will move to another state.That’s not going to kill the “California appeal.” As Solis says: “People are always going to want to live in California but I can see life getting more expensive here a lot faster than I expected.”

Children and grandchildren have also enjoyed the same exemption on inherited vacation homes and rental properties, but that exemption is being eliminated altogether. That was a nice loophole while it lasted. Children who inherited rental properties with a low property tax assessment were able to rent those properties for market rates. But the intent of the amendment is to eliminate a loophole that’s been abused by out-of-state residents trying to avoid California property tax — specifically, “East Coast investors, celebrities, wealthy non-California residents, and trust fund heirs.” That’s actually written into the law!

The Legislative Analyst’s Office says about 60- to 80,000 California properties are handed down each year. (4) It says the state could raise tens of millions of dollars a year by eliminating this exemption. That figure may go even higher as more and more homes are assessed at a higher rate. It will also raise money to help fight wildfires.

The new rules go into effect on two different dates. Rules for inherited property begin on February 16th, while the transferring of a favorable tax base begins on April 1st.

Kathy Fettke is the Co-Founder and Co-CEO of RealWealth. She is passionate about researching and then sharing the most important information about real estate, market cycles and the economy. Author of the #1 best-seller, Retire Rich with Rentals, Kathy is a frequent guest expert on such media as CNN, CNBC, Fox News, NPR and CBS MarketWatch.
PrevPrevious28+ Housing Market Predictions for 2021-2025 [Is the Crash Coming?]
NextHow California SB 1079 Will Impact Real Estate Investors in 2021Next
Share on facebook
Share on twitter
Share on pinterest
Share on linkedin
Share on email
Share on print