Getting a down payment for that first-ever home purchase can be overwhelming, especially if you’re trying to buy a home in pricey California. But one Southern California assemblyman is hoping to make it a little easier, with a special savings account.

The money could then be used for qualified expenses in the purchase of a primary residence, such as a down payment or closing costs. If it’s used for anything else, the account holder would owe state taxes on that amount.

The legislation defines a first-time homebuyer as someone who has not had an “ownership interest” in a principal residence within the last three years.

Steinorth says, “There is no question that homeownership is the best path to middle class wealth and stability”. And as we all know, the cost of housing in California is among the highest in the country. For many people, the dream of owning a home is completely out of reach.

According to the U.S. Department of Urban Housing and Development, more than half of middle-class families in California pay 30% or more of their incomes on housing. HUD describes those people as “cost burdened”, meaning they don’t have discretionary income for other purposes.

Steinorth says this prevents many people who don’t own their own homes yet, from being able to save for that down payment. It can also push those people into more difficult situations such as crowded housing or longer commutes. It could also force them to give up on California entirely and move elsewhere.

But, San Jose State University Professor Emeritus Larry Gerston told radio station KCBS that the bill would cost the state up to $360 million in its first year. He says that Governor Jerry Brown may not want to sign off on something with such a high price tag.

If the legislation passes, it won’t be the first in the nation. Montana has had a similar program in place since 1998. Virginia also established one in 2014.

There has been some interest in doing this at the federal level. The New York Times reported, a few years ago, saying that real estate developers and investors felt the idea could be incorporated into an overhaul of federally funded real estate programs.

One thing financial advisors say you should avoid when you are trying to scrape money together for a down payment is dipping into your 401k for a loan. You are typically allowed to borrow up to 50% of your account balance or a maximum of $50,000. An article on the Money website says if you feel you need to borrow from your 401k, you should take a hard look at your financial situation.

It suggests pulling the money from another source, such as an entertainment budget because borrowing money from your 401K can be costly and cause a lot of financial stress. For example, if you lose your job, you may be required to put the money back into the account within 60 to 90 days. And if you can’t do that, you might be faced with a 10% penalty on what becomes a “hardship withdrawal”.

Having that extra payment on a 401k loan could also make it tough to pay for other expenses related to homeownership, such as repairs or property taxes. And Financial Planner Eric Frechman told Money it could also take a huge bite out of your future retirement funds.

He says the $50,000 you might borrow for the down payment would grow to a whopping $193,000 over 20 years, if it’s left in the 401k account. And, that any money used to pay the loan back is also money that should be added to the total amount that should be growing, instead of replacing the amount you borrowed. He suggests that if it comes to borrowing against your 401k, it might be better to keep on renting until you’ve saved enough for the down payment.

I wholeheartedly disagree with Mr. Frechman. He’s making an assumption that the 401K will quadruple in size over the next 20 years. That assumption is dependent on certain factors that are no longer in play today. You simply can’t look at the past 20 years to determine the next 20. Everything is changing.

20 years ago, Baby Boomers were ages 31-49. They were contributing heavily to the stock market during the subsequent 20 years as they prepared for retirement. And as the largest generation in history until the Millennials surpassed them in size last year, the Baby Boomers grew anything in which they invested – housing, the stock market and the economy in general.

Who will pick up the slack? Many Gen Xers are still trying to recover from their losses from the Great Recession and the Millennials, ages 18-34 are saddled with student loan debt and just getting started in life. Contributions to the stock market this past year have largely come from companies buying back their own stock!

I think it’s safe to assume that you can’t predict that the 401K will quadruple in value over the next 20 years based on this data. But even if that was true, couldn’t the same be said about a home? If that $50,000 was used as a down payment on a $250,000 home and that home did what it’s done in past, it would double in value in 20 years due to inflation.

More importantly, the homeowner would only be 10 years away from owning that home free and clear. The payments that would have gone to rent, went to pay off a mortgage instead.

Once you understand the power of real estate, you don’t need government assistance or stimulus to encourage you to buy. You just need education. You need to know why it’s so important to own property – and then you’ll pass up that $5 latte in lieu of saving for a down payment. Or to speed things up, you find ways to borrow that down payment from family, friends or your 401K – for a price, of course.

Plus, you only need 3.5% down as a down payment. If you can’t legitimately save for that or can’t figure out how to borrow it, then perhaps you’re not ready for the financial responsibility of home ownership.

I say, ‘just vote NO’ on this proposed legislation for a Homebuyers Savings Account. This plan that basically allows first time homebuyers to pay less tax than other people. And that’s just not fair.

Instead, people need to get educated and learn all the options available that don’t include more government stimulus or a lopsided tax treatment. 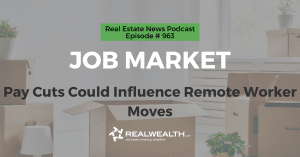 Kathy Fettke is the Co-Founder and Co-CEO of RealWealth. She is passionate about researching and then sharing the most important information about real estate, market cycles and the economy. Author of the #1 best-seller, Retire Rich with Rentals, Kathy is a frequent guest expert on such media as CNN, CNBC, Fox News, NPR and CBS MarketWatch.
PrevPreviousWhy Buy Income Property with Your IRA & How?
Next[RWS #457] Big $$ Flipping Land and Lots to BuildersNext
Share on facebook
Share on twitter
Share on pinterest
Share on linkedin
Share on email
Share on print