How To Own a Cash Machine That Makes Money For You?

Home » Learning » How To Own a Cash Machine That Makes Money For You?

What if you could buy a machine that spits out $1000 in cash every month? Sounds amazing, obviously. It also sounds too good to be true…but it’s not. The real estate cash machine is very real and you can own one. Keep reading to learn more.

Imagine if you could buy a little machine that spits out $500 cash every month. How much would you pay for such a gadget? Now imagine owning 10 of these cash machines. You’d have an annual income of $60,000 and all you’d have to do to earn that money is maintain the machines.

A neighbor bought a fast food franchise, which he successfully reinvested profits to buy 100 fast food restaurants. Now there’s a lot of cash machines!
You can buy laundromats, vending machines, create products, write songs, and sell stuff on a website. You name it, there are many different ways to create passive income so that you can stop working someday. You just have to find the one that works for you.

What if your cash machine broke down and you had to fix it? Would you be upset and throw it away or vow to never own another? Of course not! You’d use one of the month’s cash of $500 for repairs so the machine could continue to spit out cash. If you could use the machine until you die and then pass it on to your kids, there would be no need to worry about retirement or wait until you’re 65 to stop working.

Americans have been duped into thinking that contributing to traditional retirement plans are the same as buying cash machines. As the Baby Boomers head toward retirement, they’re realizing tax-deferred plans that were supposed to spit out cash for the rest of their Golden Years are broken and probably can’t be fixed.

What Baby Boomers did wrong?

They lost control. They handed money over to a stranger.

They lost interest. They expected the stranger to take as good care of their cash as they would, so they stopped paying attention

They settled for too little. They allowed upper-management to skim all the profits.

They got too patient. They believed what they were told – that if they just waited long enough, the money would be there for them when they needed it.

In order to create a real cash machine, you’ve got to be in control, pay attention, and be able to keep the profits. And most importantly, the machine has got to create real income for you (not a speculative hope to sell it at a higher price.)

Most people expect at least 6% annual return on their investments, so they’d generally pay around $100,000 for a cash machine that spit out $500/mo ($6000 annually). Unfortunately, not everyone has that kind of money sitting around. But what if you could borrow $80,000 and pay it back over 30 years using money from the cash machine?

Where can you find a deal like that? Little cookie cutter homes in good neighborhoods near jobs to be one of the best cash machines available today. When they are rented out to good families, the monthly rent becomes the owner’s monthly income. And as much as people like to complain about the responsibilities of a landlord, it sure beats a 9-5 job! Toilets don’t break every day, and even if they do, the landlord can make it the tenant’s responsibility to fix what they break.

Wealthy people create cash machines in two ways: owning businesses or real estate. Real estate is the simpler choice. Don’t believe me? Ask a lender! Walk into a bank and see how much easier it is to get a mortgage on a rental home than a loan for your business.

Today there are 117 million households, of which 79 million own their own home. That leaves 37 households in need of a rental. Assuming an average of $150,000 per property, there is $3.4 trillion worth of rental property out there. That’s nearly double the size of traditional investments.

If you have not taken the time to learn about real estate as an income-producing asset, you’re listening to the wrong advisors. With home prices slashed, low mortgage rates and rising rents, these cash flow machines have never yielded the double digit returns they do today. 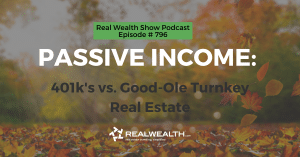 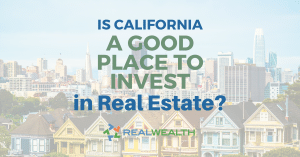 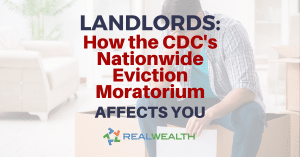 Landlords: How the CDC’s Nationwide Eviction Moratorium Affects You

Kathy Fettke is the Co-Founder and Co-CEO of RealWealth. She is passionate about researching and then sharing the most important information about real estate, market cycles and the economy. Author of the #1 best-seller, Retire Rich with Rentals, Kathy is a frequent guest expert on such media as CNN, CNBC, Fox News, NPR and CBS MarketWatch.
PrevPreviousReal Wealth Success Story: How One of our Members Went From $1000/mo Negative to $5000/mo Positive Cash Flow!
NextWhy Buy Income Property with Your IRA & How?Next
Share on facebook
Share on twitter
Share on pinterest
Share on linkedin
Share on email
Share on print

Landlords: How the CDC’s Nationwide Eviction Moratorium Affects You