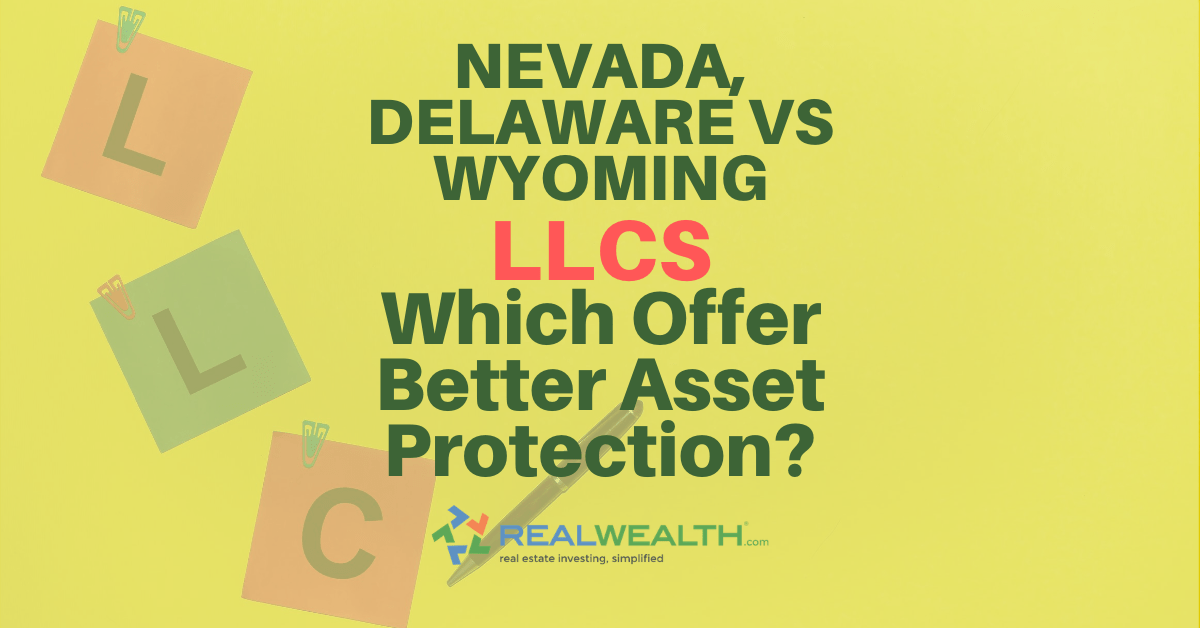 When it comes to forming a Limited Liability Company or LLC to protect your real estate investments, Californians should think “outside the box” or in this case “outside the state”. And Wyoming is one of those places to think about.

A Limited Liability Company, or LLC, is a way to operate a business without exposing your personal assets to the risk of a lawsuit. The LLC is meant to protect your business creditors from accessing your home, your car, or your personal belongings.

Most attorneys agree that holding property in an LLC is the best entity for asset protection.

But, let’s turn the tables and look at whether a personal issue, such as an injury accident, could put your LLC assets at risk — can someone suing you, personally, get access to the properties and other assets held in your LLC?

According to the Corporate Direct website, it depends on state laws. Let’s compare California to Wyoming.

Here’s the scenario as described by Corporate Direct:

You’ve been sued as the person responsible for an injury accident. The victim’s attorney learns that you own real estate inside an LLC. The attorney wants you to sell those assets to compensate the victim. Can the attorney force you to sell?

Corporate Direct says is all depends on the state of formation of your LLC.

Wyoming is considered one of the most friendly states in the nation when it comes to protecting assets with an LLC. California is not.

Nolo press has a rundown on rules for all the states. The most common court-ordered remedy is a “charging order”. That’s when any LLC dispursements for the person being sued, are given to the creditor.

But a charging order isn’t always an effective collection tool because it can only access money from a dispersement. If the LLC member doesn’t choose to take a dispersement, the creditor never gets paid.

In California and many other states, a creditor who’s had no success with a charging order can then ask the court to foreclose on an LLC member’s interest. That interest would be sold at a foreclosure sale and would likely be purchased by the creditor.

The creditor could then collect on any potential dispursements, but would have no say in company management. So if there are no distributions, the creditor is once again left high and dry.

The third and final option would be a judicial dissolution of the assets owned by the LLC member. They would be sold at a foreclosure sale and the proceeds would be handed over to the creditor.

So you have three potential court-ordered remedies in California, compared to just “one” in Wyoming. The only remedy that Wyoming allows is the “charging order”. In Wyoming, single-member LLCs are also protected by the same laws that protect multi-member LLC’s.

So back to the car wreck scenario involving a California resident who owns property through an LLC formed in Wyoming. Would a California court have the power to order a foreclosure or dissolution on that Wyoming LLC?

Corporate Direct says there’s a very strong argument that the answer is “no”.

It cites an article from “Business Lawyer” called “Judicial Dissolution: Are the Courts of the State that Brought You in the Only Courts that Can Take you Out?” The article asserts that the courts of one state do not have the power to dissolve a corporation created by the laws of another state and cites numerous cases.

Corporate Direct also points out that the judge for a case in Delaware ruled: “The superior court, and even the state of Delaware itself, cannot forfeit the charter of a foreign Corporation.”

Delaware, Nevada, and Wyoming are known as perhaps the most business-friendly states for an LLC. They are also known as corporate “havens” — especially the state of Delaware.

According to Incorp, more than 60% of Fortune 500 companies are incorporated in Delaware. That’s created an aura of prestige for any business entity created in Delaware whether it’s a corporation or an LLC.

Incorp also says because of that corporate involvement, Delaware tends to be more legally predictable. Corporate giants have settled issues regarding mergers, acquisitions, and management/shareholder disputes so it has a substantial amount of case law that goes back more than a hundred years. That’s created a wealth of precedent-setting information on what you can and can’t do.

Among the financial benefits, LegalZoom says Delaware doesn’t tax out-of-state income and initial filing fees and franchise taxes are low. Delaware also has something called Chancery Court. That’s a court system dedicated to business matters. Cases don’t have to line up behind civil matters and are handled more quickly.

LegalZoom says that Nevada also has a very pro-business reputation. It doesn’t tax business income, capital gains, or inheritance and it has no franchise tax. It also doesn’t require annual meetings or operating agreements. And, it has no information-sharing agreement with the IRS although the IRS may be able to get that information some other way. LegalZoom says that Nevada may be a good fit for LLC owners who value privacy.

Like Nevada, Wyoming is also highly recommended for privacy and low costs. It was the first state to allow the formation of LLCs, back in 1977 and is still a top pick among investors. Among the incentives: No tax on business income and no franchise tax. Plus, members can be even “more” anonymous than those in Nevada.

It says Wyoming doesn’t require the disclosure of LLC members and managers in the articles of organization — and, that Wyoming also offers a “lifetime proxy”. That’s when an LLC member expresses his or her voice through another person who holds stock or shares of the LLC.

If you want to understand the pros and cons of setting up shop in one those three states we can give you a referral to one of our top asset protection attorneys.

Kathy Fettke is the Co-Founder and Co-CEO of RealWealth. She is passionate about researching and then sharing the most important information about real estate, market cycles and the economy. Author of the #1 best-seller, Retire Rich with Rentals, Kathy is a frequent guest expert on such media as CNN, CNBC, Fox News, NPR and CBS MarketWatch.
PrevPreviousHow To Determine If It’s a Buyer’s or Seller’s Market?
Next30 Inspiring Real Estate Quotes That Will Change Your LifeNext
Share on facebook
Share on twitter
Share on pinterest
Share on linkedin
Share on email
Share on print