Life, Liberty and the Pursuit of Property?

Home » Learning » Life, Liberty and the Pursuit of Property? 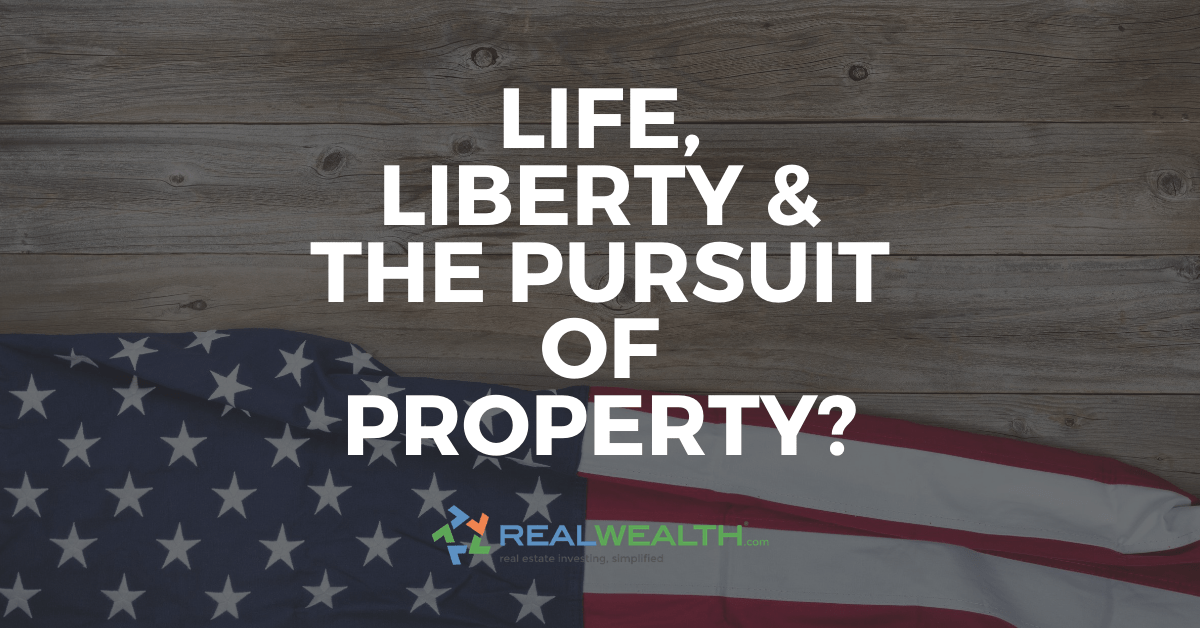 “We hold these Truths to be self-evident, that all Men are created equal, that they are endowed by their Creator with certain unalienable Rights, that among these are Life, Liberty, and the Pursuit of Happiness…” The Declaration of Independence, 1776.

As the celebration of our Nation’s birth is right around the corner, we thought it might be interesting to look back on the values, ideals and unalienable rights that America was built upon.

Buying land is a tradition that dates back hundreds of years. As real estate investors, there are valuable lessons to be learned from ideals and vision of The Founding Fathers.

The Birth of a Nation

Our Founding Fathers were striving to create a united nation where everyone is equal. Where property and possessions could not measure the worth of a human. Where government could be something that supported humans, rather than the things they own.

These brilliant, visionary men recognized that the things we own are not synonymous with our happiness. And a government should not and cannot tax the unalienable rights of life, liberty and the pursuit of happiness.

What is the Pursuit of Happiness? 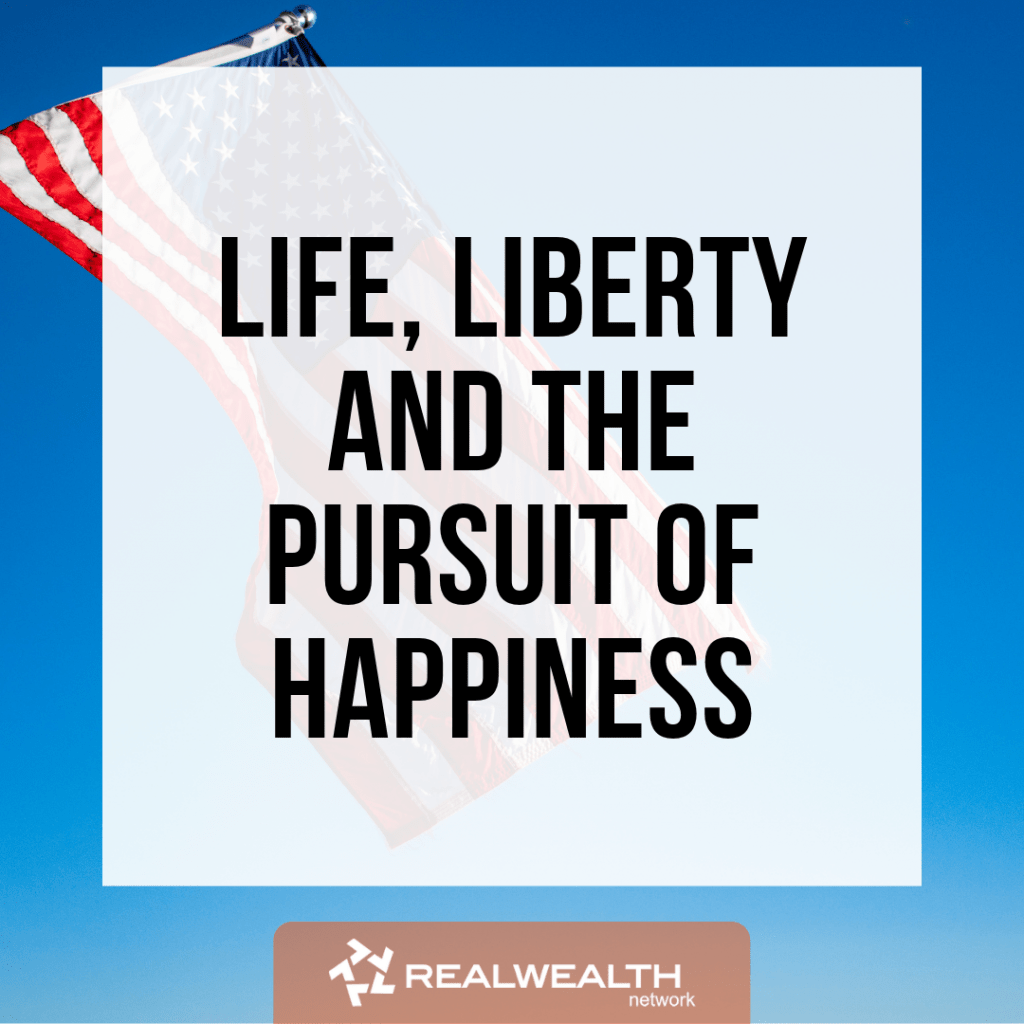 Historians have struggled to define the pursuit of happiness as an unalienable right. John Locke, a prominent philosopher in the eighteenth century wrote, Two Treatises of Government. In The Second Treatise, Locke lists natural rights of “life, liberty, and estate,” with “estate” meaning “property”.

Locke’s writings were very popular among many of The Founding Fathers, and with Jefferson especially. While Jefferson chose to omit “property” and replace it with the “pursuit of happiness,” it’s clear that Jefferson basically mirrored Locke’s unalienable rights.

There are a number of different historical accounts that try to make sense of why Jefferson decided to make this change.

Why the Pursuit of Happiness?

One common explanation is that Jefferson may have been uncomfortable enough with the idea of slavery and didn’t want to perpetuate property ownership in slaves by including an unalienable right to property.

However, this explanation still doesn’t explain why Jefferson decided on “pursuit of happiness”.

There are two main approaches that historians have taken in an attempt to explain the reasons behind Jefferson choosing the rhetoric, “pursuit of happiness.”

Approach 1: There is Meaning Behind The Pursuit of Happiness

The first argues that “pursuit of happiness” has important meaning, including the right to property. Or the happiness found with the ownership of materials and property, family life, or the Enlightenment idea of public virtue.

Approach 2: There is No Substantial Meaning Behind The Pursuit of Happiness

The second, and most common, approach is that the replacement of “property” with the “pursuit of happiness” has no substantial meaning, at least not enough to form a discernible conclusion.

Becker goes on to say, “It adds rhythm and beauty to Jefferson’s listing of unalienable rights, and if the pursuit of happiness does anything more in the Declaration, it is only to add sense of undefined idealism…”

The Right to Property: A Fundamental, Natural Right 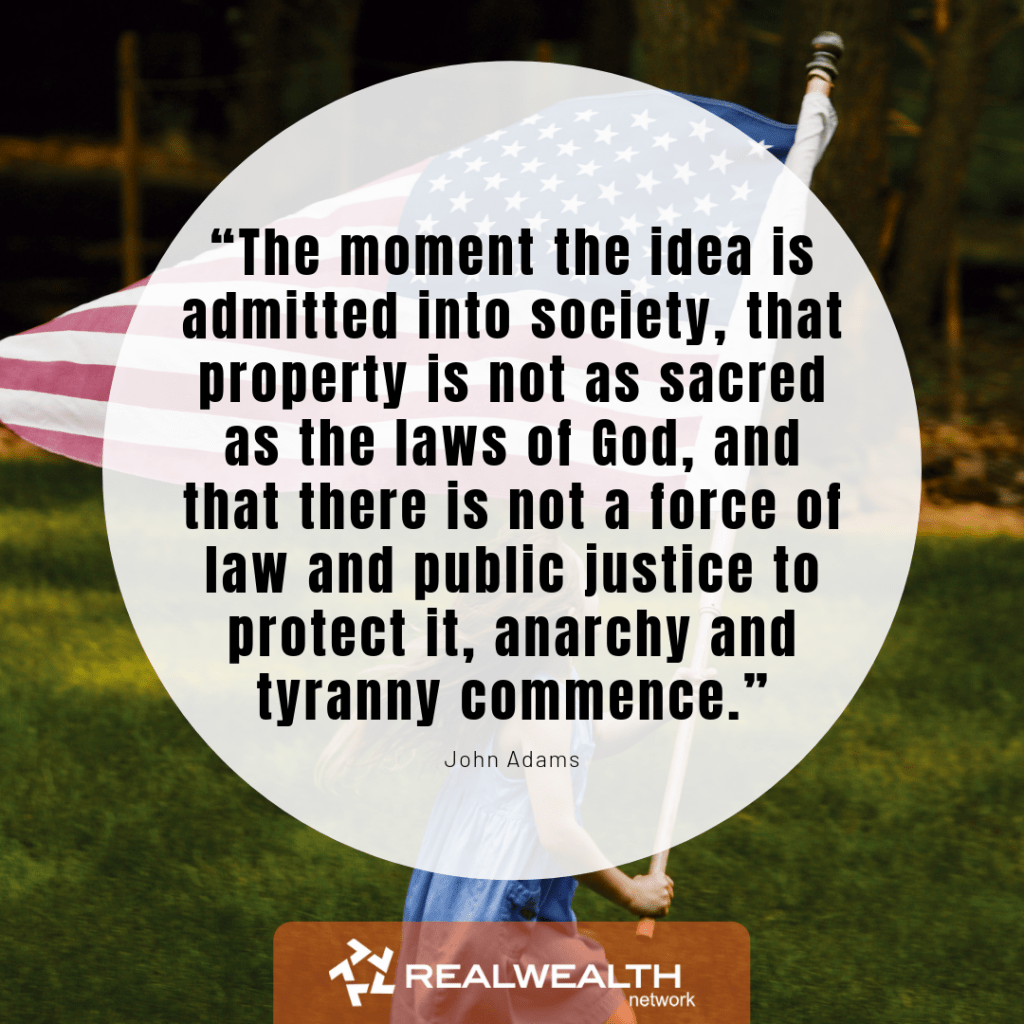 The writings of Enlightenment-era philosophers, John Locke and Adam Smith, greatly influenced The Founding Fathers. These two philosophers believed the right to property was a fundamental, natural right. Because of this, the founders of the United States of America knew that government should exist to protect private property.

John Adams wrote, “The moment the idea is admitted into society, that property is not as sacred as the laws of God, and that there is not a force of law and public justice to protect it, anarchy and tyranny commence.”

He goes on to write, “If ‘Thou shalt not covet,’ and ‘Thou shalt not steal,’ were not commandments of Heaven, they must be made inviolable precepts in every society, before it can be civilized or made free.”

In 1792, The Father of the Constitution, James Madison wrote, “Government is instituted to protect property of every sort; as well that which lies in the various rights of individuals, as that which the term particularly expresses. This being the end of government, that alone is a just government, which impartially secures to every man, whatever is his own.” 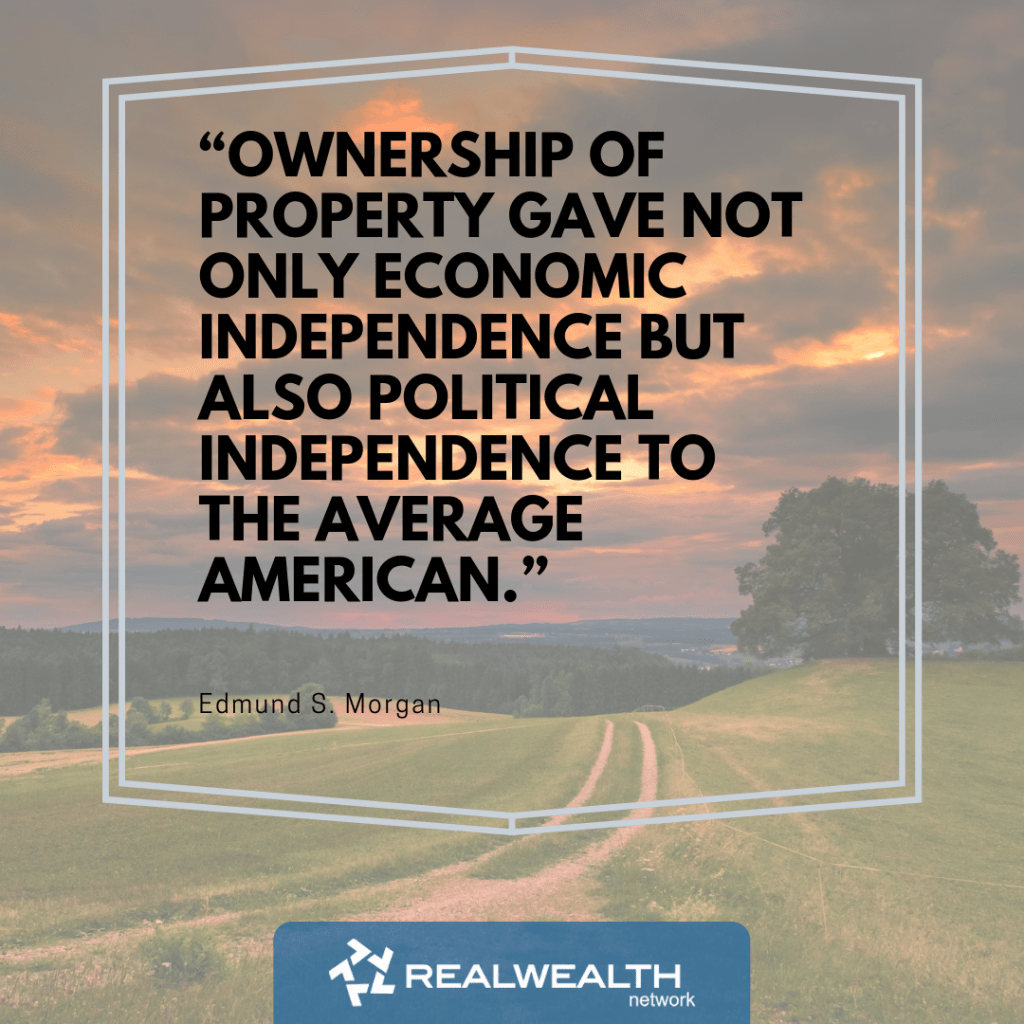 “Land is the most permanent estate and the most likely to increase in value,” wrote George Washington.

Glenn A. Phelps, a George Washington scholar, said regarding land, “It was not subject to the changing fortunes of paper money inflation, royal mercantile policies, the loss of political favor, or the decline of one’s skills through age or poor health.”

Our forefathers understood the outcome of tomorrow is a direct result of the actions taken today. Ratified on July 4, 1776, The Declaration of Independence offers the unalienable rights of life, liberty and the pursuit of happiness (or property) to all Americans. On this 4th of July, we hope that you are celebrating your life, liberty and the freedom to pursue our happiness.

Kate previously worked part-time for RealWealth in 2012, but her passion for real estate brought her back to rejoin our marketing team in 2018. She assists with research, content creation, SEO strategy, graphic design, and social media. Kate has a diverse background in marketing and education, with a bachelors degree in Communications and a Masters in Education. She’s worked in digital marketing for 9 years and is knowledgeable in a wide range of real estate related topics. Kate lives in Salt Lake City and enjoys skiing, golfing, hiking with her two Airedale Terriers and going to Utah Jazz games.
PrevPreviousIs Buying a Vacation Rental Property a Good Investment?
NextWhat is a Real Estate Mentor?Next
Share on facebook
Share on twitter
Share on pinterest
Share on linkedin
Share on email
Share on print