Is North Carolina a Good Place to Invest in Real Estate?

Home » Learning » Is North Carolina a Good Place to Invest in Real Estate? 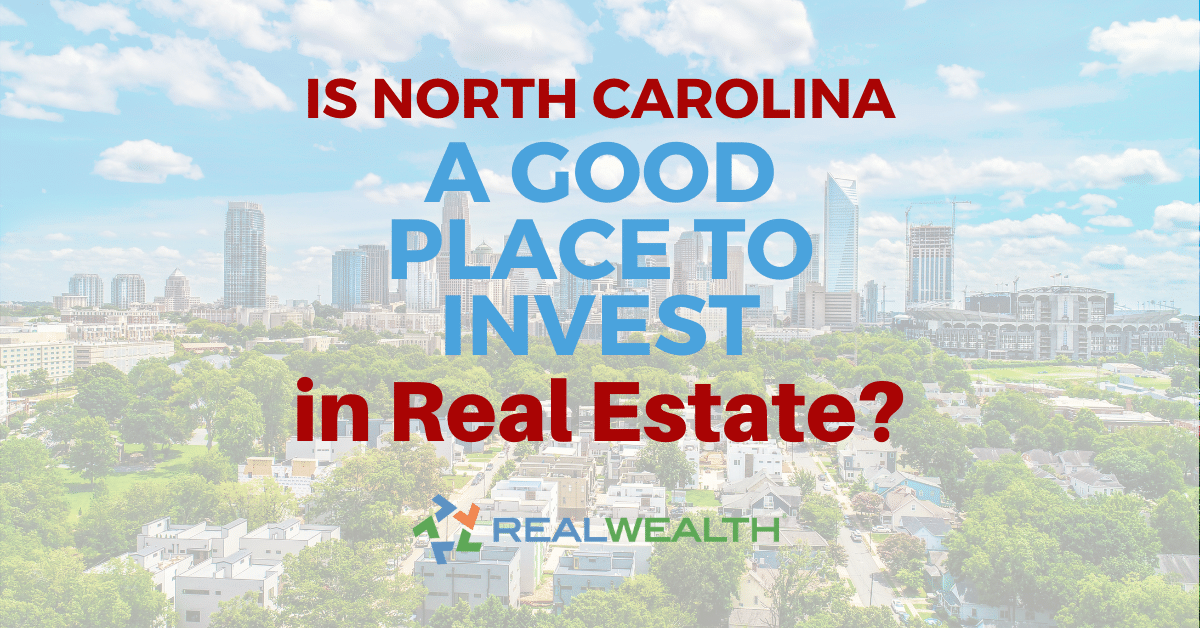 From the Outer Banks of the Atlantic Ocean to the Great Smoky Mountains, North Carolina is the 6th most visited state in the U.S. North Carolina is one of the 13 original colonies and is the 28th largest state by area. It has mild weather all year long (except for the occasional tropical storm…?) and hundreds of miles of white, sandy beaches. North Carolina is also known for being “first in flight” thanks to the ingenuity of the Wright Brothers.

Like many other real estate markets across the country, North Carolina is experiencing low inventory and high demand. So, is North Carolina a good place to invest in real estate? Or should investors set their sights elsewhere? Find out what’s happening in housing markets around the state and which cities you should consider investing in.

The Current State of North Carolina’s Economy with COVID-19

North Carolina’s total Gross Domestic Product or GDP is over $591 billion and the 11th largest in the U.S. It’s workforce consists of 4.73 million employees with a median household income of $53,855.

NC’s unemployment rates were really low going into February of this year. Then the Coronavirus reared its ugly head forcing America and the rest of the world to shut down. By the end of March, North Carolina had approximately 172,000 new unemployment claims.

Fortunately, unemployment levels have steadily declined since March and thus far, continue in that direction.

Another interesting fact is that every single resident of NC lives within 30-minutes of a community college.

There are a few important signs of a good housing market: a growing population, abundant jobs and affordability. If an area is experiencing all of these economic trends, it’s very likely it’s a great place to invest in real estate.

With each of these indicators in mind, consider if the following North Carolina real estate market trends are happening or not.

People Are Moving There

More than 10.5 million people live in North Carolina and the population has risen 10 percent since 2010. It’s currently growing faster than the national average. In the past several years, there’s been a noticeable influx of Millennials moving to cities like Charlotte, Raleigh and Durham.

Forbes ranked NC as the best state for business and has been in the top five for the last 12 years. Major industries driving the state’s economy include: manufacturing, finance, insurance, real estate, professional services, government, education, transportation and health care. NC is also one of the tax-friendliest states for businesses.

The job market continues to expand, which is a major reason North Carolina’s population keeps growing.

North Carolina provides a lower than average cost of living. While real estate values vary a bit across North Carolina, the median cost to buy a single-family home or condo is just under $215,000. Since 2019, home values have increased over 6 percent and Zillow predicts a 5.1 percent increase in the coming year.

Something to note about North Carolina is it’s impressive infrastructure. You can basically get anywhere by sea, air, road or rail. The state has the second largest highway system in the country. NC has 3,300 miles of train tracks, 70 public airports and over 80,000 miles of roads.

5 Best Places in North Carolina to Invest in Real Estate

On the whole, homes in North Carolina are going up in value as are rents. This means, if you buy rental property in one of North Carolina’s growing markets, there’s strong potential for cash flow.

Let’s take a look at the best places to buy real estate in North Carolina and why.

Charlotte is the largest city in NC, with a metro population of around 2.5 million. It’s among the top four states where Millennials are choosing to move. Even though the state’s overall population is going up, 41% of towns are shrinking. Around 70% of people moving to North Carolina are settling in Charlotte and the “Research Triangle” areas.

Average single-family homes in Charlotte are selling for $262,385. An 8.2% change compared to last year, Charlotte home values are expected to go up nearly 6 percent in 2021.

The massive rise in population and affordability in Charlotte has caught the attention of many real estate investors. The area is growing like crazy and rental demand for affordable homes is through the roof. The market should stay competitive for the foreseeable future. Having said that, consider looking for growth markets just outside of Charlotte where properties are much more affordable. Properties in these markets could start seeing a lot more appreciation than in the past.

A popular place for Millennials to live is Durham, NC. It’s the fourth biggest city in the state and is growing by the day. The median home price in Durham is $261,870. The city is affordable and while there aren’t a ton of houses for sale, it’s possible to find cash-flowing rental property.

The pandemic has caused increasing home values to slow, but Durham’s job market remains strong. That said, this slow down isn’t expected to last because demand is still so high. Properties should keep appreciating faster in this market than many other cities. Home prices have increased 5.5 percent since last year.

Investors have found luck with securing new construction homes before they are listed for sale.

The Raleigh metropolitan area attracts a huge number of college students as well as professionals.

The average selling price of homes in Raleigh is 297,861. Homes in the area have appreciated about 5 percent since 2019. The average household income in Raleigh is around $54,000, which is higher than the national average.

Like most college towns, multifamily rental properties tend to do well in these areas. Vacancies aren’t typically an issue because demand is so high. If you can find a reasonably priced multifamily property, there may be an opportunity for a good cash on cash return.

Cary, NC is a suburb of Raleigh and was considered the nation’s top boomtown back in 2016. The town of Cary and Raleigh have sort of blended together, so their housing markets look similar. Because Raleigh is a bigger city real estate will generally be more expensive. Whereas Cary, a much smaller suburb will be a little less expensive. Average home prices in Cary, NC are $292,160.

Located in the Blue Ridge Mountains of North Carolina, Asheville has a lively art, music and outdoor scene. Average household incomes are below the state average, which makes a strong case for Asheville being one of the most desirable places to live in not only NC but the entire country.

On average, homes in Asheville are a bit pricier compared to the other metros we’ve talked about. Median home values are $313,902 with a 4.9% increase year over year.

Asheville is predicted to see a 40% increase in jobs over the next decade (compared to the national average of 33.5%). That’s significant because jobs are tied to income and income is tied to housing prices and so on.

Although this particular real estate market is more expensive than most, the amount of jobs expected to hit the area in the future is something to pay attention to. When there’s that much job growth, real estate values usually appreciate faster.

Greensboro is smack dab in the middle of North Carolina and the 3rd most populated city in the state. In Greensboro you’ll find several craft breweries, hundreds of restaurants and local attractions.

The real estate market is competitive. On average, homes are sold within 10 days of listing. The average single-family home price in Greensboro, NC is $170,590, an 8.9% increase in just a year. Home values are predicted to rise another 5.2% over the coming year.

The largest employers in the city of Greensboro include two major healthcare providers and Guilford County Schools. Median rents are generally around $1,100 per month, making this metro an extremely affordable place to live.

How the Eviction Moratorium is Impacting North Carolina Landlords

The CDC’s nationwide eviction moratorium began on September 4th and extends through the end of the year. More than a handful of states had issued their own eviction guidelines and assistance before the national order was announced.

The eviction moratorium gives tenants some relief, at least for now. But there’s been no financial help for landlords since the CARES Act expired at the end of July. Rental property owners with tenants unable to pay rent are faced with covering multiple mortgages–with no option to evict.

The good news is that on September 28th, North Carolina announced a new program called, Housing Opportunities to Prevent Evictions (HOPE).  It’s a rental and utility assistance program that will use $117 million in state and government funds to provide financial assistance to “North Carolina’s most vulnerable tenants.”

Landlords with qualifying non-paying tenants will receive rental payments directly from the HOPE program funds. North Carolina is trying to implement initiatives that benefit both renters and landlords during the pandemic.

The nationwide eviction moratorium is impacting landlords around the country in various ways. If you’re looking to buy in North Carolina, make sure you know about state-specific eviction laws and rental assistance programs for you and your tenants.

Is North Carolina a good place to invest in real estate? It certainly can be, depending on where  you buy. There are opportunities in growth markets around the state to buy rental property with strong potential for appreciation and cash flow. Again, you just have to know what to look for. Pay attention to market fluctuations and other economic trends in the areas you’re looking to invest.

Still not sold on investing in North Carolina or interested in other markets? Learn more about top real estate markets around the U.S.

Kate previously worked part-time for RealWealth in 2012, but her passion for real estate brought her back to rejoin our marketing team in 2018. She assists with research, content creation, SEO strategy, graphic design, and social media. Kate has a diverse background in marketing and education, with a bachelors degree in Communications and a Masters in Education. She’s worked in digital marketing for 9 years and is knowledgeable in a wide range of real estate related topics. Kate lives in Salt Lake City and enjoys skiing, golfing, hiking with her two Airedale Terriers and going to Utah Jazz games.
PrevPreviousHow To Reduce Rental Property Maintenance Costs
NextReal Estate Investment Trust: The Ultimate GuideNext
Share on facebook
Share on twitter
Share on pinterest
Share on linkedin
Share on email
Share on print