Home » Learning » Is California a Good Place to Invest in Real Estate? 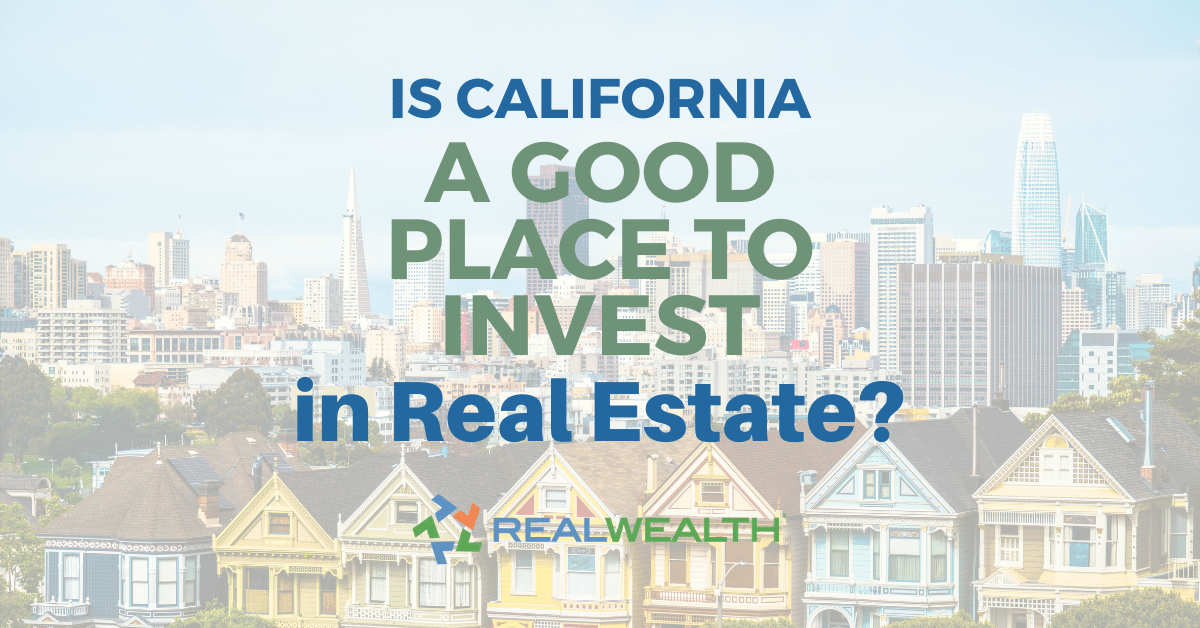 Sunny California continues to draw people, businesses and tourists alike. The Golden State offers diversity, both in geography and economy. From mountains to beaches, California’s economy is made up of industries from entertainment and technology to agriculture (thanks to its year-round fair weather), manufacturing, health and finance.

With so many companies headquartered in big metro areas like Los Angeles, San Francisco, San Diego, San Jose, and Sacramento, it’s no wonder why California’s population continues to grow–despite its dense population, a lack of affordable housing and high cost of living.

Everyone knows that it can be really hard to buy real estate in California because it’s so expensive. Average home prices are $524,400, which is the highest in the nation by a long shot. California’s unaffordability is a major reason so many people have to rent. This state presents a unique scenario for investors because it has super high real estate prices coupled with insanely high rental demand and rental rates.

Is California a good place to invest in real estate? This article will help determine if you should consider buying investment property in California. Also, find out which areas have the strongest housing markets and if ROI is possible in these higher-priced markets.

Already own an investment property in California that isn’t cash flowing well? Or are you just tired of the strict regulations imposed by the state?

Become a member of RealWealth to learn how you can increase your cash flow by investing out of state! Click here to get started. It’s 100% free to join and it only takes 5 minutes. ?

The Current State of California’s Economy

California’s economy is the largest in the United States and fifth largest in the world, with a GDP of over $3 trillion. Its workforce is made up of nearly 18 million people and the average household income was just over $75,000, as of 2018.

Before the Coronavirus hit, national unemployment rates had never been lower. Since then, it’s been a completely different story, with unemployment surpassing Great Depression rates. California experienced the most job losses in April and May, when unemployment rates peaked at 16.4 percent.

As people are starting to go back to work, unemployment rates are slowly beginning to come back down. But as of July, 13.3 percent of California’s population is still unemployed.

California was one of the first states to enforce shelter-in-place orders and essentially shut down. Even with swift and strict action to fight the Coronavirus, California’s population is so dense that it didn’t seem to matter. Just a month ago, the number of COVID-19 cases (over 12,000) hit an all-time high.

The good news is that Coronavirus numbers in California are going down in September. However, there’s no doubt the pandemic has put our national economy on shaky ground.

Even with its way-above-national-average home prices and rental rates, California’s population is approaching 40 million and keeps growing. Steady population growth should pique the interest of investors that know what to look for in strong real estate markets.

The California Real Estate Market in 2021

Home values in California have been recovering since the Coronavirus outbreak, but compared to a year ago, the increase is meager. The real estate markets in most larger metros in California are described as expensive, with very few homes for sale.

Best Places in California to Invest in Real Estate

California is an enormous state with millions of residents. As such, real estate markets will vary a great deal, depending on location. Naturally, proximity to big metros like LA and San Francisco come with higher price tags.

Sacramento, the capital of California, has areas with good affordability, and strong job and population growth. Arden and Arcade are both located in Sacramento County and Roseville is one of the largest cities in the metro area.

The median home price in these areas is $327,073. Home values around Sacramento and Roseville are expected to grow as much as 33 percent over the next three years. Buying investment property in Sacramento or its surrounding markets could very well offer great returns for investors.

Affordability in parts of San Bernardino County has gotten better over the last few years because the county has worked to address the issue with housing programs. This metro is considered to be one of the less expensive in Southern California, in terms of rental rates. The good news for rental property owners is that rents have increased 5 percent annually and rental housing is in high demand. The value of homes has also gone up tremendously, just in the last year.

Riverside’s housing market is similar to San Bernardino’s, but generally a bit more expensive. Average home prices in Riverside County last month were $450,000. Compared to last year at this time, that’s an increase of nearly 15 percent.

Beaumont is a city located in Riverside County between two of the tallest mountains in Southern California (San Gorgonio & Mt San Jacinto). The city has grown over 38 percent in population since 2010 and is the second fastest growing city in the state. The housing market is competitive in Beaumont, most likely because it’s more affordable than the surrounding Riverside and San Bernardino metros. Last month, average home sales were $380,000, which is an 11 percent increase since last year.

A 3,000 acre, freshwater lake located in western Riverside County, Lake Elsinore is the fourth fastest growing city in California. Since 2010, over 15,000 new residents have moved to Lake Elsinore, increasing its population nearly 32 percent. Average home prices are up 10 percent since last year.

A city located in Fresno County, Coalinga is small, but is one of the fastest growing cities in California. There are three colleges and universities close by and home prices remain affordable. Last month, the average home sale price was $194,000, which is a 1.6 percent increase from last year. The housing market is also not super competitive right now.

Located just 45 minutes West of Redding in Trinity County, the Douglas City area is a mountain town settled during the California Gold Rush. In August, the average home listing price was $322,000. This is significant because that’s a 17.4 percent increase compared to 2019. The county’s population is smaller than most, but growing with it’s proximity to larger metros.

According to Redfin, the average price of homes sold last month in San Pedro was $620,000, a 2.2 percent increase year-over-year. More than half of its residents rent instead of own. However, Zillow predicts that home prices in the San Pedro area will start to go down in the next few months. San Pedro is still a bit pricey, with average rents of $2,500.

Note of Caution: How the COVID-19 Eviction Moratorium is Impacting California Landlords

While there are still areas of California that might offer good investment opportunities, right now may not be the very best time to buy there. Coronavirus and the strict statewide eviction moratorium are having a tremendous impact on rentals in the state.

At the end of August, California Governor Newsom passed legislation that states:

“[N]o tenant can be evicted before February 1, 2021 as a result of rent owed due to a COVID-19 related hardship accrued between March 4 – August 31, 2020, if the tenant provides a declaration of hardship according to the legislation’s timelines. For a COVID-19 related hardship that accrues between September 1, 2020 – January 31, 2021, tenants must also pay at least 25 percent of the rent due to avoid eviction.

Tenants are still responsible for paying unpaid amounts to landlords, but those unpaid amounts cannot be the basis for an eviction. Landlords may begin to recover this debt on March 1, 2021, and small claims court jurisdiction is temporarily expanded to allow landlords to recover these amounts. Landlords who do not follow the court evictions process will face increased penalties under the Act.”

Everyone deserves a safe place to live, which makes this great news from a humanitarian perspective. But it puts landlords in a tough position. I was recently speaking with my manager, who’s family owns rental properties throughout the Los Angeles area. She told me that that they have several tenants that owe upwards of $10,000 in back rent already. By the time they’re able to start collecting rent many of these non-paying tenants will owe more than $20,000 in back rent, which they won’t be able to fully recoup until 2022. Luckily, my manager’s family can afford to wait for their money, but that doesn’t make it any less difficult. Money is tight right now, which is making it difficult to do things like renovations and continue paying their team of workers who depend on that income… so that they can pay their own rent.

You may also like: Landlords: How To Pay Your Mortgage and Property Expenses During COVID-19

On the bright side, there are some provisions for smaller California landlords:

“A California law, AB 3088, extends many of California’s Homeowner Bill of Rights protections (see below) to small landlords until January 1, 2023. This law applies certain HBOR protections to first lien mortgages and deeds of trust that are:

Long story short, if you’re considering buying rental property in California, you may want to hold off until we have a better idea of what the future may bring.

Is California a good place to invest in real estate? After reading this article, you should have at least a decent understanding of real estate markets within California that offer the opportunity for returns. It’s totally possible to buy somewhat affordable property in parts of California with high rental demand and strong appreciation potential.

Is California out of your budget? Consider learning more about investing out-of-state in markets around the country.

Kate previously worked part-time for RealWealth in 2012, but her passion for real estate brought her back to rejoin our marketing team in 2018. She assists with research, content creation, SEO strategy, graphic design, and social media. Kate has a diverse background in marketing and education, with a bachelors degree in Communications and a Masters in Education. She’s worked in digital marketing for 9 years and is knowledgeable in a wide range of real estate related topics. Kate lives in Salt Lake City and enjoys skiing, golfing, hiking with her two Airedale Terriers and going to Utah Jazz games.
PrevPreviousLandlords: How the CDC’s Nationwide Eviction Moratorium Affects You
NextHow To Reduce Rental Property Maintenance CostsNext
Share on facebook
Share on twitter
Share on pinterest
Share on linkedin
Share on email
Share on print