How To Invest in Real Estate with Other People’s Money 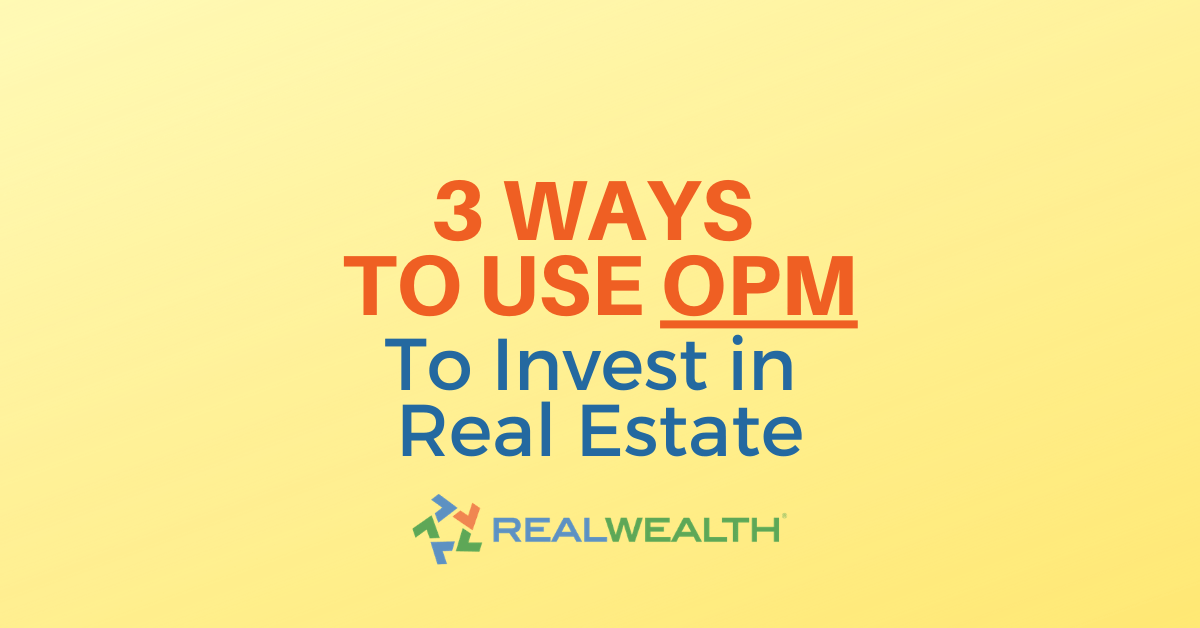 One of the best things about investing in real estate is the ability to use other people’s money (also called OPM) to fund your deal. Yet you get all the tax benefits, the appreciation, and the cash flow from that deal while somebody else pays your loan off for you.

To write this article I spoke with Brian Stark, the VP of originations at IceCap Group, which is a direct private lender in New York City. Brian has been a private real estate lender for about 20 years and he helps provide loans to real estate investors nationwide. He has bought and sold hundreds of properties and originated over 1,400 real estate loans.

We’re seeing so many changes in lending right now, so I asked him about what’s going on. Continue reading to gain some valuable insight about how to invest in real estate with other people’s money in today’s lending environment.

What are the big changes happening in lending today?

According to Brian, on the investment side we’re still seeing rates that are pretty well depressed, but not in a negative way. In some areas, they’re even going down a tiny bit because there’s so much investment activity and there’s a lot of competition among lenders. Everybody’s feeding for the borrowers and depressing rates a little bit. While there’s a little interest rate bump for consumers, the investment rates are staying stable overall, and in some cases they are even reducing a tiny bit.

This is great news!

There’s so much money out there chasing some kind of yield without being able to get it, but lending provides that. When speaking with Brian I was a little surprised to hear this perspective — I just hadn’t really heard that rates are stable in this way. I wondered if it was happening more with private lenders and not so much the Fannie and Freddie lenders.

Brian explained that there are two buckets — one bucket would be government-backed money like Fannie and Freddie banks and the other bucket would be all the private lenders. When we say private lenders, we’re not just talking about the nice guy that you sit next to in church who’s got a couple of hundred thousand in their IRA, we’re talking about what have now become, in the last five or six years, multi-billion-dollar companies that have raised huge rounds of capital.

These include hedge funds, private equity funds and substantial private institutions that are in the business of making loans to real estate investors, for fix and flip and buy and hold investments. The difference is that these types of companies are not governed by United States government regulations and stockholders, in most cases.

These companies are basically governed by the owners of the company, who on a given morning might say, “Hey, let’s get into this business. Hey, let’s lower rates. Hey, let’s do higher LTVs. Let’s go compete with this company or that company. I want 50 more borrowers this month. Let’s do another $50 million this month.” Just that fast, they can lower their rates because it’s their money.

How is business to business lending regulated

When it comes to business to business lending, there is regulation to the extent that you and I are both regulated. We’re not allowed to drive past a certain speed or steal somebody’s car. These companies are regulated to that degree, but in reality there isn’t a lot of strict regulation of business-to-business lending. In fact, there is very little in many states and these companies stay out of the half a dozen states where there is a lot of regulation.

The states that are the most regulated include California, Arizona, Nevada, North and South Dakota, Utah, and Alaska. Territories, like Puerto Rico, are also tough because just it’s a whole different business.

How are private lenders able to lower costs?

Lower cost of money comes in a lot of forms. One form is, “Hey, our rates are low, we’re charging 5%. Oh, now, we’re charging 4.75%. Oh, we can do it for 4.5%.” Another lower cost of money is lowering fees, closing faster, raising what we call leverage. So, “We’ll lend 80%. Oh, we’ll lend 85%. We’ll lend 100%.” All those things are coming together to make more money available at a lower rate. It’s been said that there’s over $2 trillion looking for a home. Liquid money that’s literally sitting in investors’ bank accounts.

This isn’t surprising since $5 trillion was just created in the past year. It has to go somewhere and it likes to go to real estate.

If you want to invest in real estate with other people’s money you need to have (1) decent credit, (2) a little cash on hand and (3) education.

The first thing lenders want to see is that you have decent credit — at least about 650 and ideally 700 to 720 — before you seek out a private lender. This is really important and it’s not about you as a person. Lenders need to be able to sell their loans to their own funds, a cash management structure, or to Wall Street or other institutions that will buy your loan so that they can turn around and use that money and make more loans.

The second thing private lenders want to see is that you have, at least, some cash. It’s true that there are many ways to invest in real estate without any money, but from the perspective of a private lending company, you need to have liquidity. These companies want to deal with somebody who can show them that they have enough money to make their payments for six months, pay their closing costs and origination fees, and a little bit more. They don’t want to give a loan to somebody who is going to be out of cash by month number two.

If you don’t have any experience investing in real estate (with or without other people’s money), definitely get some knowledge. Take a course, go through a workshop, get a partner, join an investment club like RealWealth that can coach you through the buying process. To jump into this business, or any business, all alone, knowing nothing, having done nothing, with nothing, is just asking for trouble. It’s so easy to make a wrong decision. It’s great to do the first 6, 8, 10 deals with someone who knows what they’re doing.

When to start investing in real estate (with or without other people’s money)?

The best time to get started investing in real estate was yesterday. Whatever day you’re thinking about starting, don’t let any time go by. Just get started. Jump in, figure it out, get going. Real estate takes time… to research where and what to buy, to put deals together, to build equity.

Brian mentioned knowing a guy who’s worth easily $100 million and he wears mostly t-shirts, sandals, and shorts. This immediately made me laugh, because living in Malibu we often see people who we assume are homeless, and we only later find out that they are actually billionaires. Ha!

When it comes down to it, people that don’t look wealthy often have the most assets. These are the people you want to spend time with, because you can learn a lot.

What holds people back from investing in real estate?

There are a lot of reasons people don’t start investing. A big one is fear, especially nowadays. People are wondering if the economy is going to collapse. They think that prices have been going up for too long and we’re going to see another 2008.

The truth is that this probably will happen, but we just don’t know when. BUT this isn’t really something to worry about that much. The economy is cyclical and crashes always happen. So, who cares? There’s always good deals to be had. Just learn to watch, be careful, don’t borrow too much, don’t leverage yourself too heavily. Always have cash and keep your credit strong. When the economy collapses, great, go buy more investment property.

I knew a lot of people who were impacted in 2008. My mom’s pastor, for example, had 10 rental properties during the downturn. They most certainly lost value, but he didn’t sell them. He was collecting the rent and he was living off of the rental income. During that time, rents actually went up because more and more people had lost their homes and were renting. Because of this he didn’t actually feel the recession, and now those homes have gone up dramatically in value.

Long story short, start investing in real estate as soon as you can and don’t be afraid of using other people’s money.

Kathy Fettke is the Co-Founder and Co-CEO of RealWealth. She is passionate about researching and then sharing the most important information about real estate, market cycles and the economy. Author of the #1 best-seller, Retire Rich with Rentals, Kathy is a frequent guest expert on such media as CNN, CNBC, Fox News, NPR and CBS MarketWatch.
PrevPreviousShould I Use an LLC for Rental Property: 8 Key Questions & Answers
NextYour Step-By-Step Guide to Investing Through RealWealthNext
Share on facebook
Share on twitter
Share on pinterest
Share on linkedin
Share on email
Share on print