[REN #936] Due Diligence: New Flood Risk Tool for Individual Properties Across the U.S.

Millions of U.S. properties are at substantial risk of flooding, and some say that risk is growing due to climate change. But it hasn’t been easy to determine a property’s flood risk. Many states don’t have flood history disclosure requirements, and FEMA maps don’t tell the whole story. A non-profit academic research group hopes to close that information gap with a new visualization tool that calculates flood risk for 142 million properties across the U.S.

The First Street Foundation says, this is a first-of-its-kind flood risk tool that will help millions of Americans find information on past floods, and determine the current and future probability of a flood at a specific address. The main feature of the tool is the so-called “Flood Factor”. (1) The “Flood Factor” is a flood risk score based on a 10-point scale. It goes from a minimal flood factor of 1 to an extreme flood factor of 10. But this tool offers much more information than just the score.

Look for a Property’s “Flood Factor”

The summary page for a property will also give you historical information on flooding at that address and how much the flood risk is likely to increase over time. For example, an address in St. Augustine, Florida, brought up information about Hurricane Matthew’s storm surge in September of 2016. It showed the depth of flooding for that address which was zero, because that property didn’t flood during the storm, but the risk of a flood is still high. It’s rated as a 6 on the 1-to-10 Flood Factor scale. For 2020, that translates into a 1% chance that the property will have a 3-foot flood at some time this year. If you look lower on the page, you’ll also find information on the number of buildings that did flood during Hurricane Matthew along with a map showing the areas that were flooded.

There’s another section that displays three maps of the nation that represent precipitation, sea level, and temperatures. You can see where they stand now compared to how much they are expected to increase 15 years from now and 30 years from now.  You’ll also find information on how all this data impacts your neighborhood, city, county, and state.

The site also attempts to educate people about how much damage a flood can cause with a three-dimensional drawing of a home. You can click on different flood levels to see what gets damaged by the water in the illustration.

At 6”, the damage is mostly limited to floors, carpets, and drywall. As the flood level increases, electrical systems, appliances, vehicles, and other parts of the property are impacted. The tool also applies this information to the likelihood of a flood of different depths for the property you are investigating. It says an inch of flooding will typically cost about $27,000 in damage.

Measures to Protect Your Property

Users are also given information about what they can do to protect their properties. The suggestions are grouped into four cost categories. A few of the cheapest solutions include the clearing of gutters, sandbags, and sealants. As you go up in cost, the suggestions include things like raising electrical outlets, elevating HVAC systems, and putting your entire home on stilts, or moving it altogether.

It’s an amazing tool that was put together with the help of top scientists and academic researchers from 20 leading U.S. universities including Harvard, Wharton, Johns Hopkins, and MIT. They recreated past storms to put together flood histories and used modeling to determine future probability of flooding from rising tides, storm surges, heavy rainfall, overflowing rivers, and flash flooding.

Number of U.S. Homes at Risk of Flooding

This information, they say, has been historically difficult or even impossible to find. Currently, FEMA says that 8.7 million properties are at substantial risk of flooding or are located within Special Flood Hazard Areas. Foundation researchers have found that many million more homes are at risk — about 70% more than FEMA. They say, a total of 14.6 million properties have a 1% yearly chance of flooding, which puts them into a “100-year” flood zone category. That leaves about 6 million property owners with no knowledge of their current flood risk, based on the Foundation’s research.

When future environmental changes are taken into consideration, Foundation researchers say the number of homes at substantial risk of flooding will increase. They say by 2050, 16.2 million homes will be at risk.

The National Association of Realtors has acknowledged the introduction of this tool saying it “supports efforts to provide more granular and accurate flood risk assessment tools.” The NAR also says, it is not in a position to evaluate or endorse one flood risk tool over another, but it “does note that First Street’s research has been vetted by more than 80 world-renowned scientists.” (2)

The tool can give people a reference point for determining whether they should do flood-protection upgrades or buy flood insurance. Flood risk should also be part of a buyer’s due diligence. It’s something that could happen to any home, but knowing that a property is at an increased risk should be factored into the cost of owning the property.

Floods are the most expensive and the most common natural disaster in the U.S. Since the year 2000, Pew researchers say floods have caused more than $845 billion in damage, and that climate change will cause more severe flooding in the future.

Laura Lightbody of the Pew Charitable Trust says, “More information and transparency for consumers and home buyers and renters about flood risk is critical, no matter where it comes from. We know that residents and home buyers don’t have this type of information, or it’s very limited.”

The First Street Foundation says on its mission page, “FEMA maps were not created to define risk for individual properties. This leaves millions of households and property owners unaware of their true risk.” It hopes this new risk assessment will help Americans protect their most valuable assets from the devastating impact of a flood.

[RWS #788] COVID-19: Economist Peter Schiff on the Financial Fallout from the Pandemic

[RWS #787] Real Estate Investing: An Immigrant’s Success as a Busy Tech Professional With a Passion for Passive Income 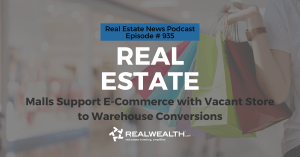 Kathy Fettke is the Co-Founder and Co-CEO of RealWealth. She is passionate about researching and then sharing the most important information about real estate, market cycles and the economy. Author of the #1 best-seller, Retire Rich with Rentals, Kathy is a frequent guest expert on such media as CNN, CNBC, Fox News, NPR and CBS MarketWatch.
PrevPrevious[REN #935] Real Estate: Malls Support E-Commerce with Vacant Store to Warehouse Conversions
Next[RWS #787] Real Estate Investing: An Immigrant’s Success as a Busy Tech Professional With a Passion for Passive IncomeNext
Share on facebook
Share on twitter
Share on pinterest
Share on linkedin
Share on email
Share on print

[RWS #788] COVID-19: Economist Peter Schiff on the Financial Fallout from the Pandemic

[RWS #787] Real Estate Investing: An Immigrant’s Success as a Busy Tech Professional With a Passion for Passive Income