The spring home buying season is about to get interesting. A new survey shows that homeowners are in the mood for selling, and that 12.1 million of them are preparing to put their homes on the market. Lenders say they are also seeing a big surge in mortgage applications among people getting ready to buy.

NerdWallet conducted a survey of almost 1,500 homeowners in mid-April to find out what they are planning to do. Of the more than 12 million people who want to sell, the survey shows that 16% of them plan to do so in the next 18 months. Many of them say they are selling sooner than they had previously planned because of changes in the housing market.

NerdWallet’s housing expert, Holden Lewis, says, “Homeowners can see that we’re moving away from a strong seller’s market in many areas. So, their feelings and motivations are shifting, too.” Survey results appear to indicate that sellers are also responding to an increasing number of buyers as mortgage rates drop.

As the selling activity increases, that also opens the door for sellers who want to trade up because they will have more to choose from. They’ll be able to sell one home and buy another more easily. NerdWallet says, “Nearly 3 in 5 of those planning to sell in the next 18 months say there are more homes available for buyers to pick from in their areas.”

As seller momentum increases, many are doing upgrades to increase their home’s curb appeal and better compete with other sellers. NerdWallet says, that three-quarters of the people planning to sell in the next 18 months, are also planning to do major renovations and repairs.

That bit of data comes with some advice. Lewis says, “Homeowners preparing to sell should make their renovations count, spending where they’re most likely to increase home value and get a good return on their home improvement investments.” (1)

Other aspects of this changing perception of the housing market include higher expectations for appreciation in the next two years. Almost 40% of the people responding to the survey believe their home values will be rising, but they also say they are more realistic about the sale price. 84% of them say they’d be willing to accept an offer that’s less than what they are asking.

Lenders are also anticipating a strong buying season within the new home market. The Mortgage Bankers Association says, applications for mortgages on new homes shot up 15.6% in April. That’s compared to April of last year. They were up 3% from March. The Association says, based on these numbers, we can expect to see a big increase in home sales. (2)

MBA’s Joel Kan says, “There was a healthy increase in new home purchase activity in April, boosted by the strong economic and employment conditions seen in the first quarter of 2019.” The Association expected to see that new home sales were 10% higher this April than they were last April.

Economists say the lack of entry-level homes will bring home sales down at the low end. Grant Thornton chief economist, Diane Swonk, says, the housing market will “tread water” because of the low-end inventory shortage. As many real estate experts have said, the lack of affordable homes comes down to the high cost of construction and other barriers, such as local zoning and permitting rules.

Swank said in a HousingWire story, “The escalating cost of materials have triggered production cuts; recent tariffs on imported materials, like lumber from Canada, have also pushed up costs at the same time that labor shortages have intensified.” She says, “The cheap labor from immigrants that once made new housing affordable has all but disappeared.” (3)

If you look at the difference between housing starts and housing demand, Swonk says you’ll find the worst case of under-building since the 1970s recession. She says that local governments need to loosen regulations on residential construction and that tariffs and student debt also need to be addressed. Without changes, she says, next year’s housing market could be worse.

There’s still time for a course correction. Swank says, the “canary is still singing,” but without major changes to zoning laws, construction costs, and how student debt is serviced, the music could come to a screeching halt in 2020.

As you might expect, the housing market forecast is a mixed bag with some optimism and increased sales activity. But we still face a lot of headwinds with the number of homes needed to meet the entry-level demand. 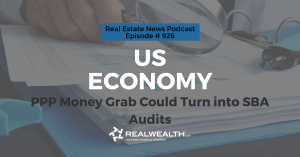 [RWS #782] Subsidized Housing: A Win-Win for Tenants and Landlords

Kathy Fettke is the Co-Founder and Co-CEO of RealWealth. She is passionate about researching and then sharing the most important information about real estate, market cycles and the economy. Author of the #1 best-seller, Retire Rich with Rentals, Kathy is a frequent guest expert on such media as CNN, CNBC, Fox News, NPR and CBS MarketWatch.
PrevPrevious[REN #739] Real Estate News Brief – Busy Home Builders, Lender Loan Bias, Wealthy Baby Advantage
Next[REN #741] Millennials Trying to “Catch Up”Next
Share on facebook
Share on twitter
Share on pinterest
Share on linkedin
Share on email
Share on print

[RWS #782] Subsidized Housing: A Win-Win for Tenants and Landlords