7 Best Chicago Neighborhoods to Invest In 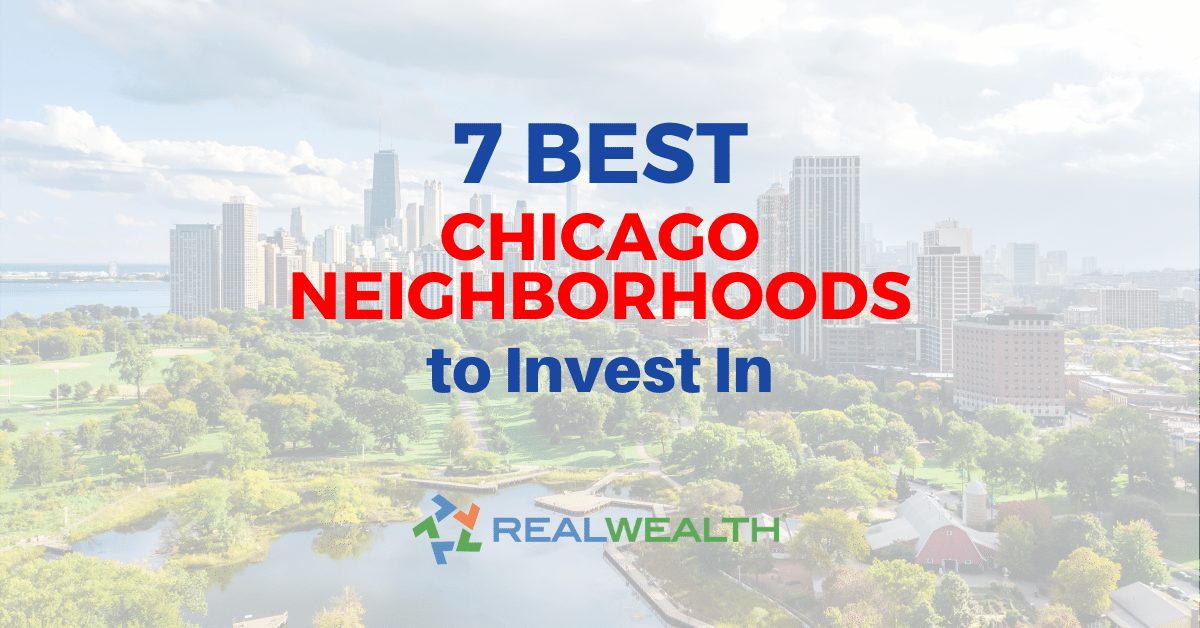 Summary: In this article, learn the 7 best Chicago neighborhoods to invest in. Also find out the best neighborhoods in Chicago for appreciation, rental demand, affordability and more.

Chicago sits on the southwestern banks of Lake Michigan, the fifth largest body of fresh water in the world. Also known as the “Windy City,” Chicago is home to almost 3 million people that inhabit 100 diverse neighborhoods.

Chicagoans are into their sports. They have eight professional sports teams, including two Major League Baseball teams. And if you’ve ever been to a sporting event in Chicago, you better get your foam finger and rally cap on and be ready for a good time. (Go Cubs!)

The city has more to offer than just sports. Chicago boasts some 200 theaters, 250 live music venues, and dozens of annual film festivals and parades. Not to mention it’s the hometown of former President and First Lady Barack and Michelle Obama.

Chicago is often lumped in with big cities like New York, Los Angeles and San Francisco–and for good reason. Each one is densely populated, has an abundance of jobs and attracts millions of tourists a year. I think it’s fair to say that Chicago is similar to LA, NYC or SF in many ways. But the one exception, especially significant for real estate investors, is that Chicago is affordable.

Buying a decent home in LA will cost upwards of half a million dollars. Real estate prices in NYC are even more expensive. Meanwhile, the average price of a home in the greater Chicago area is below the national average.

The real estate market in Chicago presents a unique opportunity for investors. It’s one of the biggest cities in the country, yet it’s still relatively affordable. For that reason, it’s worth taking a closer look at some of the best Chicago neighborhoods to invest in.

What the Best Neighborhoods in Chicago Have to Offer

The Chicago housing market is still recovering from the Great Recession of 2008. In fact, home values aren’t expected to fully come back until 2021. That makes it possible to buy an investment property in Chicago at a very reasonable price. Before investing in any market, you need to figure out why it could be a good place to buy real estate. Let’s dig into one of my most favorite cities in the world, Chicago!

Chicago Has a Strong Economy & Job Opportunities for Practically Everyone

Chicago is known to have one of the most balanced economies in the nation. In fact, there isn’t one sector that employs more than 12% of the workforce. Chicago’s $697.4 billion economy is the third-largest in the U.S. and is larger than entire nations such as Poland, Thailand, Sweden and Belgium.

There are also 12 Fortune Global 500 companies located in the Chicago area. Leisure and hospitality are big industries, along with abundant employers in the private sector. The average household income is around $68,400.

Like almost every major city in the country, Chicago experienced huge job losses when COVID-19 came to town. Workers in the hospitality, tourism, and leisure industries suffered the most job losses.

The latest data on unemployment rates in Chicago was released by the BLS in August. The report showed that jobs in the Chicago metro are down 7.6% compared to 2019. On the bright side, jobs have slowly come back over the last few months.

Over the last six years, residents of Illinois have left the state. The majority of people leaving were an older demographic with higher incomes. Even with a slowly declining population, Chicago is still the third most populous city in the United States, behind NYC and LA.

An ideal real estate market has a steadily growing population–which Chicago doesn’t have. But with such a highly populated city already and a strong economy producing billions of dollars a year, investing in some of the best Chicago neighborhoods is still a great option.

As of February 2020, the average rent for an apartment in the city of Chicago was $1,943, according to RentCafe. That’s higher than average rents nationwide, which were $1,468. Rental rates have risen two percent compared to last year, slower than the national average of 3.2%.

The number of renter occupied households in Chicago is around 46%. The metro area is densely populated and filled with multi-family homes. All types of demographics rent in Chicago. From luxury high rise apartment buildings downtown to bungalow-style single-family homes on the outskirts of town, a large number of Chicagoans prefer to rent.

Renting in Chicago is appealing for a lot of reasons. It provides flexibility, requires no down payment, avoids property taxes, and ongoing repairs and maintenance. Plus, Chicago is the only metropolitan where less than 20% of annual income is spent on rent.

A limited housing supply is another factor leading to high rental demand. The point is, there are neighborhoods all around Chicago with great potential for appreciation and rental income.

In no particular order, here are 7 of the best Chicago neighborhoods to invest in real estate…

Rogers Park is just 10 miles from downtown Chicago and three miles from Evanston. In this very walkable area, you’ll find a lot of 1930s era single-family homes as well as multi-family apartment buildings. The neighborhood has several beaches, parks and quick access to all sorts of amenities. Loyola University is located in Rogers Park and brings lots of rental demand from students. These are just a few of the reasons Rogers Park is one of the best Chicago neighborhoods to invest in. The average home price in Rogers Park is $222,000 and the average rent is $1,199 per month.

Located just south of Rogers Park, Edgewater residents can also enjoy beachfront views of Lake Michigan. The real estate market in this neighborhood has become more competitive in recent years and it’s easy to see why. The average home in Edgewater is just $250,000 and values have gone up 32% in the last three years. Edgewater’s growth makes it one of the best up-and-coming neighborhoods in Chicago. Average rents in Edgewood are around $1,700.

One of the most popular neighborhoods in Chicago is Logan Square. Here you’ll find the sprawling eight-acre green space of Palmer Square. The streets are lined with 100-year old trees, and many homes are original greystones and bungalows. Logan Square, like much of the Northwest Side, is attracting a younger demographic, aka Millennials–making this one of the best Chicago neighborhoods for singles.

The price of a home is quite a bit higher in this neighborhood–around $450,000. However, homes have appreciated over six percent since 2019 and are expected to increase another seven percent over the next year.

Rental rates are also notably higher in this neighborhood. The average rent in Logan Square is $2,000. Three bedroom single-family homes or apartments rent for around $2,500 a month. If you can find a deal on a property, high rents could justify investing in Logan Square.

Located in Chicago’s Lower West Side, Pilsen has more of a suburban feel, which tends to attract families. The neighborhood is made up of apartments, condos and single-family homes. The University of Illinois and the UIC Medical District bring lots of students and professionals to the area.

The average home in Pilsen costs around $350,000. Average monthly rents are around $1,600. Rental demand is high and the three L stops in Pilsen make it easy to get around the city.

Avondale is another neighborhood that’s gentrifying. Homes are less expensive than Logan Square, but it’s still a pricier, middle-class neighborhood. Avondale has really good access to public transit and I-90. This is one of the reasons home prices in Avondale are expected to go up over the next year by 6.6%. Compared to last year where home values appreciated 2.7%.

The median home price in Avondale is around $400,000. Rated as a B in terms of family-friendliness by Niche, Avondale has high rental demand and high rents. The average three-bedroom home rents for about $2,000 a month.

Home values in Humboldt Park were hit hard by the Great Recession and still haven’t fully recovered. Housing prices in Humboldt hit their lowest in 2012 at just $191,000. In 2020, the average price of a home is $342,303. A 4.2% increase since last year, the price for an average home in Humboldt Park is expected to go up 6.6%.

The Humboldt Park neighborhood is known for its foreclosed and distressed properties. This is great for investors looking for available properties to buy–but not great for rental rates. Monthly rents in Humboldt Park are around $1,700, which is slightly below the Chicago average.

The Chicago neighborhood of Uptown is close to the beach, famous for its jazz music and amazingly affordable homes. The median price for a typical home in Uptown is around $312,000. Much like Avondale and Humboldt Park, the price of homes in Uptown is expected to increase 6.3% over the next year. The neighborhood presents a good opportunity for investors looking for appreciation. Average rents in Uptown are around $1,600.

Bonus: Other Neighborhoods in Chicago to Invest in

Looking to invest in Chicago?

Become a member of RealWealth to view sample properties in the best Chicago neighborhoods for appreciation and cash flow. It’s free and only takes 5 minutes! ?

The best Chicago neighborhoods to invest in are the ones that are affordable, have high rental demand, and are growing. Investors might be wise to keep an eye on areas even further outside of Chicago and other large metropolitan areas.

COVID-19 had forced us to adapt to a new way of living, one centered at home rather than away. Now more than ever, people are putting a greater emphasis on actually liking the place we call home.

Could this be another reason new construction homes seem to be on the rise? Or why Millennials are leaving big, crowded cities with tiny apartments for suburbs, more space and bigger houses?

Without the constraints of being chained to an actual desk, the world is anyone’s oyster!

Kate previously worked part-time for RealWealth in 2012, but her passion for real estate brought her back to rejoin our marketing team in 2018. She assists with research, content creation, SEO strategy, graphic design, and social media. Kate has a diverse background in marketing and education, with a bachelors degree in Communications and a Masters in Education. She’s worked in digital marketing for 9 years and is knowledgeable in a wide range of real estate related topics. Kate lives in Salt Lake City and enjoys skiing, golfing, hiking with her two Airedale Terriers and going to Utah Jazz games.
PrevPreviousReal Estate Investment Trust: The Ultimate Guide
NextWhat is Net Operating Income in Real Estate?Next
Share on facebook
Share on twitter
Share on pinterest
Share on linkedin
Share on email
Share on print