People across California now have access to an earthquake early warning system. Governor Gavin Newsom launched the statewide system on the 30th anniversary of the Loma Prieta earthquake, this last October 17th. This new system uses a network of seismic sensors that deliver a warning through a smartphone app. It’s not a big warning, but it could give you a few extra seconds to “duck, cover, and hold.”

You may have seen the headlines about the launch of the system. The MyShake app was developed by UC Berkeley, California Institute of Technology, University of Oregon, and University of Washington. If an earthquake is coming, the app will issue an audio message that says, “Earthquake! Drop, cover and hold on. Shaking expected.”

The first version of the app was launched in 2016 but was only issuing alerts to public agencies, like PG&E and Bart, to help test the system. Having a few extra seconds can make a big difference for public service operations. For Bart, officials can slow trains. For firefighters, garage doors can be opened so fire trucks don’t get trapped. For hospitals, doctors can pause sensitive operations.

The public launch happened first in Los Angeles with an app called ShakeMeLA. Many had the app installed on their phones during the Ridgecrest quakes last summer, but were not notified of the quakes because they were too far from the epicenter. The app was initially designed to alert people about quakes that would cause damage, but Angelenos complained, saying they wanted a heads up about shaking.

Scientists revised the app to provide warnings for smaller quakes, so users would know when to expect shaking. I suppose if I were stuck in a skyscraper, it might be nice to know if the shaking I’m about to feel is something to worry about.

Adjust for Smaller or Larger Quakes

The app is calibrated to notify users via cell phones when shaking is expected on a scale of magnitude 3.5  to 8.0 or higher. The default is set to 6.0, but that can be lowered to 3.5, or increased to 8.0.

There’s also a map of the world with dots marking all the latest quakes. You can zoom in on a location and check the exact location of a particular quake’s epicenter, along with other data like the magnitude, the depth of the quake, and any building or road damage.

Users can send reports to researchers about any earthquakes they experience. The app is still considered a prototype, so these reports will help them make improvements. Sensors that deliver this information have been installed up and down the west coast, across California, Oregon, and Washington. The L.A. Times reports that they haven’t finished the installations yet, and are working on installing hundreds more in rural areas. (1)

So how much warning will you get? Seismologists say the system could give people as much as 20 seconds to prepare for an earthquake the size of Loma Prieta, but only if you are not at the epicenter. The warning would be less for people closer to the epicenter so it depends on where you are at the time of the quake.

The L.A. Times reports that the app would have given people in the Marina District of San Francisco 20 seconds of warning for the Loma Prieta quake. In San Jose, the warning would have come just a few seconds beforehand. In Santa Cruz, at the quake’s epicenter, would not have gotten a warning.

Warning, but Not Prediction

As the U.C. Berkeley news site reports, this system provides a warning, but cannot “predict” earthquakes. (2) The sensors detect seismic waves, called “P” waves. Scientists say they travel faster than “S” waves which cause the damage. There’s a bigger time gap between those two waves the farther you are from the epicenter, which allows for more of a warning.

U.C. Berkeley seismologist, Richard Allen, says, “Delivering alerts remains technically challenging, both to rapidly detect earthquakes and to deliver the alerts in a timely way.  The reality is that warnings will arrive before, during or after shaking starts, but in all cases, they allow us to better respond and survive the earthquake.”

At the launch of the MyShake app, Governor Newsom encouraged everyone to download the app because we all know “the big one” is just around the corner.

This is a good reminder to make sure you have adequate earthquake insurance on your properties. 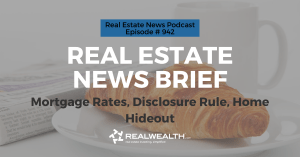 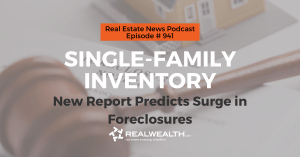 Kathy Fettke is the Co-Founder and Co-CEO of RealWealth. She is passionate about researching and then sharing the most important information about real estate, market cycles and the economy. Author of the #1 best-seller, Retire Rich with Rentals, Kathy is a frequent guest expert on such media as CNN, CNBC, Fox News, NPR and CBS MarketWatch.
PrevPrevious[REN #811] Real Estate News Brief – Yield Curve Turns Positive, WeWork Avoids Bankruptcy, NAR Email Scam Warning
NextIs Section 8 Good For Landlords or Not?Next
Share on facebook
Share on twitter
Share on pinterest
Share on linkedin
Share on email
Share on print