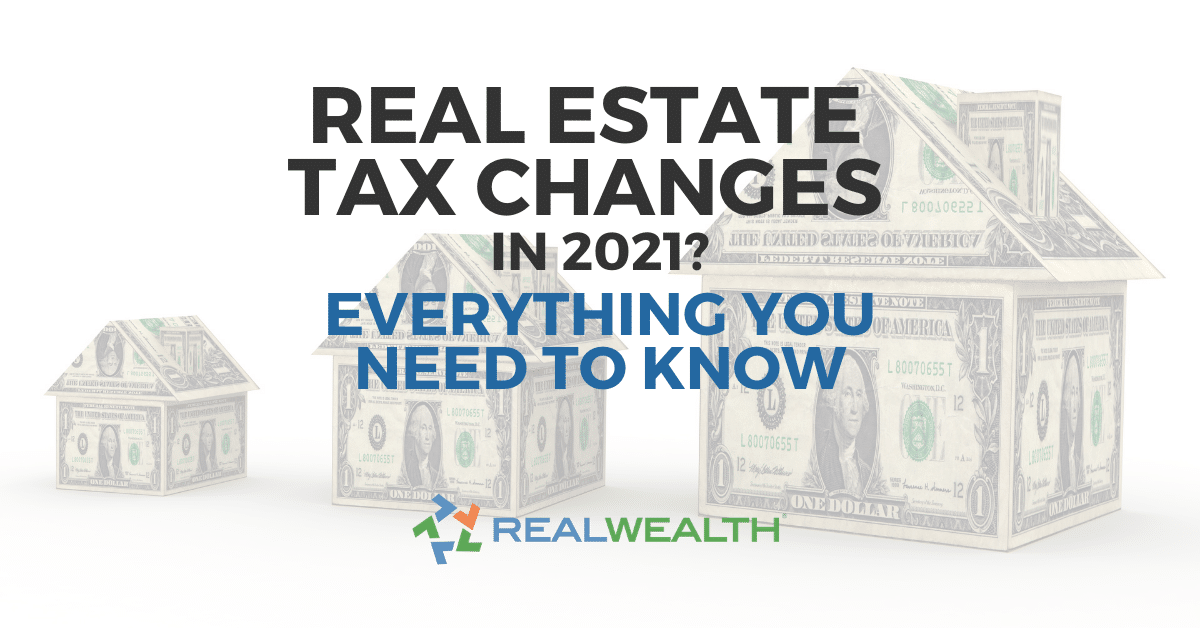 Proposed Tax Changes Across the Board in 2021

There are a number of tax changes the Biden administration has proposed, not just impacting real estate. These changes would potentially increase overall taxes for the wealthiest (top 1% or 2%) and reduce the tax burden for middle and lower classes.

The laws that are in play range from income and estate taxes to long-term capital gains tax. Whether you own real estate or not, if one or many of these proposed tax changes get passed in Congress, every taxpayer will be impacted. The severity of the impact for high income earners may be significant, but as the saying goes, “Don’t count your chickens before they hatch”.

React rather than anticipate tax law changes. There are always last second changes to these laws. You never know what will be in the new laws until they’re passed.
Toby Mathis
Tax Lawyer

Next we will introduce what exactly what laws are in play, why real estate investors need to pay attention, and how to minimize the downside of any proposed changes and maximize benefits. Stop the anxiety of Biden’s potential tax increases and prepare yourself for what may lie ahead.

There are a number of transfer tax changes that could happen this year. Below are some of the proposed changes.

Under current laws, there’s a 40% transfer tax on estates worth more than $11.58 million. This means that someone could leave an inheritance of $11.7 million and not be subject to federal estate or gift tax.

Biden’s proposal is to increase estate taxes to a top rate of 45%. The plan would also decrease estate tax exemptions from $11.58 million to $3.5 million per person and $1 million for gift tax.

Will this pass? Many experts (including Mathis), say it’s unlikely.  However, if you have a lot of money and are afraid about getting hit hard by changes to estate and gift tax exemptions, now would be the time to begin a “gifting plan”.

The annual gift exemption limit of $15,000 will remain unchanged in 2021. Meaning, individuals may give up to $15,000 to multiple heirs and pay no federal gift taxes. A married couple can each give away $15,000, which would allow for twice the gift amount with zero federal tax burden.

Possible Elimination of Step-Up in Basis

There have been talks of a possible loss of the step-up in basis. A step-up in basis works like this: Let’s say I bought a stock for $10 and it appreciated to $100. If I sold the stock before I died, I would get taxed on the $90 growth. If I hang onto it until after I die, my heirs would inherit the money tax-free.

Right now, the step-up in basis states that upon death, capital gains taxes will be based on the value of the asset at the time of death or six months later, regardless of when it’s distributed to the heirs.

While Biden’s plan regarding the step-up in basis is somewhat unclear, it’s likely one of two proposals will happen. First, taxing the gains that have not been realized by the decedent. This would mean the estate of the person who has passed would be required to pay the tax at death based on the estate or assets fair market value. The second option would be a scenario where the heirs would get a carryover basis at the time of death, and pay capital gains tax when the asset is sold–based on that basis. If either of these scenarios became law, appreciated assets would see tax increases.

As of January 1, 2021, the death tax exemption in Washington D.C. decreased from $5.67 million to $4 million. So if a resident of D.C. with a taxable estate worth $10 million dies in 2021, the heirs would have to pay almost $1 million in estate taxes. The District of Columbia and 17 other U.S. states issue an additional tax on estates or inheritances.

Changes to how trusts are taxed could be coming in 2021. The Grantor Retained Annuity Trusts (GRATs), Spousal Lifetime Access Trusts (SLATs) and/or Dynasty trusts may be adjusted or done away with altogether. While these changes haven’t occurred yet, those that hold their estates in a trust should be aware of these changes potentially coming.

Section 199A tax deduction would slowly go away for those making more than $400,000 annually. Right now the current tax rate is 20%, and if passed tax rates would increase to 29.6% on qualifying income.

Under Biden’s plan, itemized tax deductions would be capped at 28% of AGI.  Biden also hopes to reinstate the Pease Limitation on itemized deductions, which is currently suspended until the end of 2025.

There may be a repeal of the state and local tax deduction cap (SALT), which limits itemized deductions on property, income and sales tax. Currently, the SALT deduction lets residents of high-tax states deduct up to $10,000 in local taxes on their federal tax returns. There was no limit before the law was enacted by Trump under the Tax Cuts and Jobs Act of 2018. Living in a state with high taxes has become more and more expensive since the SALT cap came into effect.

For taxpayers who choose to itemize deductions rather than take the standard deduction, there’s an option to deduct money paid to specific state and local taxes. Those who itemize their deductions can deduct property taxes, but have to pick between deducting income taxes or sales taxes–not both. (Most people choose to deduct income tax because the individual usually pays more in income taxes than sales taxes).

If the SALT deduction is repealed, people who make more than $100,000 would see the most significant tax increases. Reducing the allowable deduction amount would impact many taxpayers, but particularly those earning over $500,000 in annual income.

Taxpayers with incomes under $100,000 wouldn’t necessarily be directly affected by decreasing the SALT deduction. That said, the indirect impacts of changing SALT may result in a drop in funding for local and state governments. Property taxes are the state and local government’s main source of income.

Because property taxes are usually higher in the suburbs outside of large cities, the removal or increase of the SALT cap deduction would likely help those who have relocated during the pandemic.

Currently, tax rates for employers and employees are 12.4%, up to $137,700 in wages. The employer and employee would split the tax burden. Biden’s proposal would require individuals earning more than $400,000 annually to pay an additional social security tax at a rate of 12.4%. This expansion to the Social Security tax would create a tax-free gap between the Social Security base ($137,700 and the $400,000 threshold.

However, corporations and individuals should be aware of potential increases to payroll taxes. The new proposal would tax payroll on earnings over $400,000. Higher-income taxpayers would likely see a large increase in taxes. On the other hand, this increase would ultimately help the shrinking Social Security fund.

The QBI deduction enacted by the TCJA in 2017 allows an S corp to pay your income with a W2. Because wages are being paid, business owners may deduct 20% QBI on taxes. The Biden tax proposal would do away with adjusted gross income (AGI) exceeding $400,000.

Three major changes to how long-term capital gains will be taxed are as follows:

Many experts have expressed that they do not believe the increase in capital gains tax will pass in Congress.

To learn more about proposed tax Changes for real estate businesses and/or multi-family property owners, check out this article.

There’s a lack of affordable homes available nationwide, particularly at the entry level. There’s an even greater need for low-income housing. There is such a limited supply of low-income housing throughout the country that the waitlist to receive these vouchers is insanely long. This lack of affordable and low-income housing is what’s driving the Biden administrations $100 billion “Affordable Housing Fund” proposal. One of the initiatives under this proposal will be to provide additional funding to cities that have been hit hard by the COVID-19 pandemic.

Expansion of the Low-Income Housing Tax Credit (LIHTC) and implementation of a tax credit for renters. The administration is proposing a $10 billion expansion to LIHTC and $5 billion annually for the renters tax credit. The tax credit would reduce rent to 30% of income for taxpayers earning too much money to qualify for Section 8 housing.

As part of President Biden’s plan to invest in communities all over the nation, he’s proposing a First Down Payment Tax Credit of $15,000 to help first-time home buyers. The plan also includes tax credits for public service workers, such as public educators, first-responders, fire fighters, police officers, etc., who live or work in impoverished communities with low housing inventory. As an extension of the Good Neighbor Next Door program, the tax credit is meant to build up poverty-stricken, underinvested areas.

Funding also looks brighter under the Biden administration. Brokers across the country are optimistic that Biden’s presidency will provide a more stable market–with a much more predictable day-to-day.

How to Minimize the Downside of Proposed Tax Changes & Maximize Benefits

According to Mathis, there are several tax planning strategies that can be utilized to help offset a potentially high tax burden. Individuals earning a lot of money have several options to decrease their AGI, thus reducing their tax burden. These strategies include:

Need Help with Your Taxes?

The anticipation is high for what potential tax changes could occur in 2021 and the four years to come. A new presidency almost certainly comes with tax changes. That’s why it’s so important to 1) not get ahead of ourselves, and 2) come up with a plan (ideally with the help of a tax professional). Investors who come up with a tax strategy, regardless of what happens next, will be in a far better position than those who make changes, (to their estate, for example) before any laws are actually changed.

If you would like to connect with Toby or watch the full tax webinar,  become a RealWealth® member today! Simply join the network — it’s completely free and only takes 5 minutes.

Kate previously worked part-time for RealWealth in 2012, but her passion for real estate brought her back to rejoin our marketing team in 2018. She assists with research, content creation, SEO strategy, graphic design, and social media. Kate has a diverse background in marketing and education, with a bachelors degree in Communications and a Masters in Education. She’s worked in digital marketing for 9 years and is knowledgeable in a wide range of real estate related topics. Kate lives in Salt Lake City and enjoys skiing, golfing, hiking with her two Airedale Terriers and going to Utah Jazz games.
PrevPreviousTop 10 Real Estate Markets in 2021: Dallas, Charlotte & Tampa Make the List
NextTop 11 Major Challenges Facing Real Estate Investors in 2021Next
Share on facebook
Share on twitter
Share on pinterest
Share on linkedin
Share on email
Share on print