Home prices are now hitting the bubble level in four of the ten largest metros. It could be a warning for the rest of the nation.

Data analysis firm CoreLogic releases a monthly report on home prices. The one for June was just released, and it shows a 6.7% year-over-year increase in home prices from June of last year. They are still more than 16% below their peak, but CoreLogic says they’ve risen almost 50% since their lowest level during the downturn.

CoreLogic CEO Frank Martell says the steady rise in prices is due to the tight inventory, and that prices will continue to rise if we don’t solve the housing supply challenge. He says: “Home prices are marching ever higher, up almost 50% since the trough in March 2011. With no end to the escalation in sight, affordability is rapidly deteriorating nationally and especially in some key markets.”

When you break it down into sub-markets, you find more variations. What CoreLogic is pointing out in its latest report, is that home prices in some markets have gone beyond their sustainability levels. And that spells B-U-B-B-L-E.

The report publishes its finding on the ten biggest markets in the U.S. according to population. Prices have risen substantially in all ten markets, but CoreLogic says that Denver, Houston, Miami, and Washington, D.C. have now gone past their sustainability levels.

In Houston, year-over-year prices were up 3.4%. In Miami, they were up 4.4%. In Washington, D.C., they rose 4.9%. In Denver, they jumped 8.7%, but a lack of affordability does not mean that those cities had the highest price increases. It means the people who live there are not making enough money to easily pay for their mortgages. CoreLogic measures affordability by looking at per capita disposable income and other market fluctuations that can affect income levels, such as unemployment rate.

The states with the highest home price increases were Utah at 10.7% and Washington state at 12.7%. And those prices are expected to climb more than 5% over the next year. In fact, CoreLogic anticipates prices will climb another 5% over the next year across the nation. So prices may not climb as fast as they have in the past year, but they are expected to continue their upward trend.

Putting pressure on prices is the lack of inventory. CoreLogic Chief Economist, Frank Nothaft, says: “As of Q2 2017 the unsold inventory as a share of all households is 1.9%, which is the lowest Q2 reading in over 30 years.”

Rising home prices, tight inventory, and slow sales for existing homes are signs that the housing market could be headed for a bump in the road. CNBC is reporting that housing-related stocks are also showing weakness which could be another early warning sign.

Investment Advisor Mitch Goldberg writes for CNBC, saying that the stocks of companies that support the housing market have rallied during the housing recovery, but he says recent performance may indicate the rally is coming to an end.

Among the stocks that have been retreating somewhat are Home Depot. Goldberg writes that Home Depot stock prices were up 18% earlier this year, but they are now up just 10%. That’s not a horrible return, but it does show a pullback, and he feels that’s unusual for Home Depot.

He also points out that stock performance for Lowe’s has shown a similar pullback, and that Whirlpool stock has been quote “clobbered”, among others. He says none of the declines are huge but could show us that the housing market climb could be faltering.

Where Do We Go from Here?

In answer to those questions, he feels there are “three” warning signs. The first is the performance of housing-related stocks which are already showing weakness. The second is the cost of homeownership, which includes home prices, and mortgage rates. Mortgage rates are still low but they are expected to rise. If they do rise, they could bring home prices down, but if not, we could see a slowdown in home sales. The third warning sign is an increase in inventory due to slower sales. We have the opposite problem now, but if the cost of homeownership suddenly becomes out of reach, we could see a rapid rise in unsold homes.

Goldberg says: “The low inventory of available single-family homes is what keeps investors from worrying about a housing crisis spilling over into a banking crisis, which would then spill over into an economic crisis.” He also says, “The lack of inventory acts as a long term drag on the economy, which could push the United States into a recession.”

He says we are now seeing a “relentless” rise in single-family home prices, and a lag in income levels. That could be one reason that building supply retailers are feeling a financial pinch. He says cheap mortgages are keeping the housing rally alive.

Those cheap mortgages will probably not disappear quickly, as the market stands right now. However, the Federal Reserve has announced plans to start reversing all that quantitative easing that helped stabilize the mortgage market during the Great Recession.

The Fed says it will begin selling off chunks of its $4.5 trillion dollars in bond holdings in the near future. Those holdings have helped keep mortgage rates low by pumping money into the financial system. It’s not clear exactly how quickly these reductions will happen, but they are expected to have an impact on the market.

Today, it’s important to play both offensively and defensively. Make decisions as if there were a bull market coming, and keep only the investments that would hold up in a downturn. 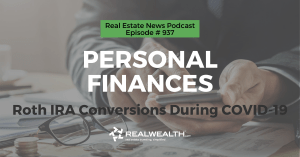 [RWS #789] First-Time Buyer: From $5 in Your Pocket to Homeownership in Five Years

Kathy Fettke is the Co-Founder and Co-CEO of RealWealth. She is passionate about researching and then sharing the most important information about real estate, market cycles and the economy. Author of the #1 best-seller, Retire Rich with Rentals, Kathy is a frequent guest expert on such media as CNN, CNBC, Fox News, NPR and CBS MarketWatch.
PrevPrevious[REN #328] Tiny Home Hotels Near Boulder, Colorado
Next[REN #330] Money Can Grow on TreesNext
Share on facebook
Share on twitter
Share on pinterest
Share on linkedin
Share on email
Share on print

[RWS #789] First-Time Buyer: From $5 in Your Pocket to Homeownership in Five Years